Kuwait’s political situation is one of the foremost causes of this unsustainable fiscal architecture. According to Collier and Goderis, commodity price booms have short-term positive implications on growth, but in countries like Kuwait with a fragile political sphere, having poor governance and “point source” resources—resources that are derived from a narrow geographical area—leaves them more vulnerable to the resource curse, leading to unstable economic sustainability in the long-run[16]. Jonathan et al’s paper “Natural Resource Export Structures and the Political Economy of Economic Growth”[17] postulates that countries dependent on point source natural resources are exposed to heightened economic and social divisions and weakened institutional capacity. Moreover, this paralyzes the ability to mitigate shocks, which is essential for sustaining increasing prosperity. Although these studies differ in the treatment of ‘natural resources’ and ‘political situation’ as the factor and resultant, both demonstrate the intricate relationship between them and the economy as a whole.

The time-series data for the World Bank Government Effectiveness index (-2.5 weak; 2.5 strong) of Kuwait supports the notion that the efficacy of the Kuwaiti government has remained inferior[21]. It experienced huge fluctuations in 1996-2010; however, it has largely remained weak after 2010, with the index consistently below the ‘0’ line.

According to Geoffrey Martin[9], Kuwait’s oil has sustained socio-political stability, primarily through fiscal illusion; essentially, the state has imprisoned the citizens under a generous subsidization regime. Alberto Alesina and Roberto Perotti assert that when a deficit-funded expenditure program is initiated by the government, citizens overestimate the intertemporal budget constraint of the government, hence, engaging in transactions that essentially underestimate future fiscal burdens. The high consumer optimism in Kuwait is a product of “fiscally illuded” citizens, who enjoy the perks of the subsidized regime and fail to recognize the acute issues plaguing the economy.

Broadly, Kuwait has a high rent-to-citizen ratio[19] and the government offers higher wages, guaranteed employment, and shorter working hours, providing incentives for Kuwaitis to choose public over private-sector employment[20]—the state employs around 80 percent of Kuwaitis. Secondly, public sector salaries, allowances, and subsidies constitute over 70% of the government budget, with public wages and benefits accounting for one-third of it alone. Hence, Kuwait seemingly follows an export-led growth policy of a welfare state with a superior public distribution system and high government intervention. Though the government has begun trimming subsidies on water, electricity, and energy, such efforts have met opposition from the contrarian lawmakers in the National Assembly.
Kuwait has an extremely fractious political system, with frequent standoffs between the executive and elected political leaders causing policy gridlocks, even during the COVID-19 pandemic. With that said, Kuwait has had 16 governments and 7 elections since 2006! Reuters reported on 8th November 2021 that the Prime Minister of Kuwait resigned yet again. The resignation, reported by state news agency KUNA, is the second this year in the midst of a feud between Prime Minister Sheikh Sabah al-Khalid al-Sabah and the elected parliament. A Gulf News article[23] reports that any reforms related to subsidies are met with resistance and have and will remain a challenge to the government. Moreover, the electricity and water subsidies reforms that took place FY 2014/15 and FY 2017/18 steered clear from touching the residential sector, for example, although it makes up 50 percent of total energy consumption. The National Assembly, filled with elected representatives, has opposed and blocked legislation aimed at achieving Kuwait’s fiscal prudence. Historically, political equilibrium has been achieved partially by establishing policies (such as high subsidies) that create market irregularities by delaying excruciating economic reforms.

The simple linear regression was estimated to predict Kuwait’s budget deficit on the basis of OPEC crude oil prices. The standard formula of the model used is given below:

Hence, there is a strong positive relationship between OPEC’s crude oil prices and Kuwait’s budget deficits.

The fiscal breakeven oil price (FBOP) is the oil price that is necessary to balance the budget of an oil-exporting country. Below is a graph of FBOP for several countries based on IMF data: 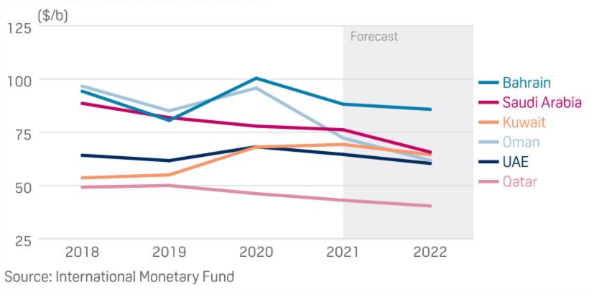 The graph indicates that Kuwait is the only OPEC member who witnessed an increase, on average, in its FBOP since 2018, in contrast to Saudi Arabia, Oman, and UAE, which implemented austerity measures and cut output for easing liquidity issues resulting from higher oil prices[5]. We will avoid directly comparing FBOP with oil prices due to certain limitations associated with the index. Some limitations to the analysis include a lack of model transparency and frequent variations in oil prices and modifications by the IMF[7]. Considering such pitfalls, the article treats the index as a broader fiscal outlook in relation to oil prices and other petrostates for contextualizing Kuwait’s economic situation. According to The Economist’s intelligence unit[6] estimates crude oil prices are at USD$64.3/barrel, which is much lower than Kuwait’s FBOP of about USD$90/barrel.

Though Kuwait’s central bank has used other monetary financing instruments such as debt monetization under its open market operations, its last debt issue occurred in 2017—the Eurobond issuance. The usage of debt issues as a source of revenue is not possible currently because Kuwait has reached its borrowing limit and requires parliamentary approval for augmenting the benchmark. Kuwait has thus far lagged behind other Gulf Cooperation Council (GCC) countries in debt issuance. Financing in 2015/16 was possible through withdrawals from its GRF (General Reserve Fund), while domestic debt issuance has ramped up in recent months[18]. In the other GCC countries, the use of buffers covered about 80 percent of the financing needs and the rest was secured through borrowing in 2015. All the other GCC countries have indeed already issued bonds and/or obtained syndicated loans in international markets since 2015. Hence, SWFs are likely the only hope for Kuwait’s structurally-weak fiscal architecture. The S&P’s negative sovereign ratings of Kuwait, due to political standoffs and high government debts that make investment riskier, only worsen Kuwait’s position by discouraging private investment in Kuwait.
The IMF’s paper “Budget Financing Options and Potential Macro-Financial Implications”[18] on Kuwait, however, opined that excessive reliance on domestic financing would crowd-out private sector credit and slow growth of central bank reserves as bank and nonbank assets are overallocated for meeting fiscal requirements. This would impede Kuwait’s diversification efforts, which are a part of its state vision for 3035. □