Can you imagine a wealthy petrostate bereft of money? Isn’t it a paradox? Let’s see.

According to the IMF[1], the crude oil exports of Kuwait in 2020 fell to around 62% of its 2014 highs. This is indicative of a demand shock which, in conjunction with the price war between oil oligopolies, OPEC, and Russia over production cuts, as well as sprouting climate consciousness that is driving a transition to cleaner fuels, has critically affected oil’s price movements for the worse. COP26 has also contributed to this movement as countries scale up climate action to meet net-zero targets for carbon emissions. Finally, with OPEC’s market power, the price of crude oil settled at around USD$40/barrel. With the state-managed oil sector accounting for 80% of government revenue[2], such movements have severely constrained Kuwait’s public spending.

In 2020, after having liquidated almost all its assets, the Kuwaiti government was projected to encounter a budget deficit of around USD$46 billion[3], its seventh budget deficit since the oil slump of 2014. Kuwait’s overspecialization in oil exports is the principal cause of this situation, owing to the low price elasticity of supply (PES) and the price elasticity of demand (PED) that has led to huge price volatility and, subsequently, unstable export revenues. How exactly did Kuwait reach this situation? The article attempts to analyze the structural weaknesses in Kuwait’s fiscal architecture that caused the imminent crisis. With that said, it will explore the following:

Kuwait, a small gulf country, has a high openness ratio ( [Imports+Exports]/GDP ) of 98.18, greater than the world average of 93.24. This high openness ratio is a reflection of the sectoral composition of the country with expansive oil-driven primary and secondary sectors. Some economists have classified Kuwait as a rentier economy, plagued by the natural resource curse, or the paradox of plenty, where Kuwait’s rich oil endowments actually have detrimental impacts on economic stability in the long run, with resource rents deteriorating productivity, human capital, and institutional quality in both the short and the long-run[10]. This can also be categorized under Dutch disease, a causal relationship between the increase in the economic development of a specific sector (for example natural resources) and a decline in other sectors[11]. The Economist’s Intelligence Unit[6] forecasts oil revenue would contribute 85% to Kuwait’s government revenue from 2021 to 2025, hence, oil assumes an instrumental role in directing the fiscal balance.

The non-oil sector of the economy mainly constitutes community, social, and personal services (15.2%); financial services (9.7%); transportation, storage, and communication (8.5%); trade, hotels, and restaurants (4.8%); real estate services (3.4%); manufacturing, excluding petroleum refining (2.2%); and construction (1.6%) etc. [14] A paper by The Oxford Institute for Energy Studies[12] argues that though Kuwait has a diversified economy through its non-oil sectors and Sovereign Wealth Fund (SWF), it fails to replicate the reverse Dutch disease effect because of structural constraints like lack of taxation, the concentration of capital in the capital-intensive energy sector and SWF, lock-in of Kuwaiti labor in the public sector, and the presence of oligopolistic structures—few firms with considerable market power. 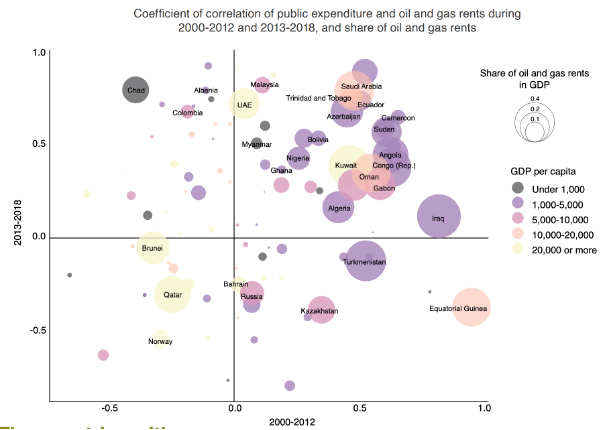 According to Olivier Durand-Lasserve et al[8], Kuwait, occupying the second quadrant (see figure above), is likely ‘procyclical’ with respect to oil prices; that is to say, Kuwait’s business cycle is linked to oil prices, and adverse price movements might force greater and more frequent fiscal shocks. However, Kuwait seems to adhere to the usual prescription for these situations, which calls for remedy through saving now for future generations. In addition to remedying the procyclical nature, saving also sterilizes the effects of the Dutch disease. Kuwait has a fiscal arrangement necessitating the government to transfer 10% of oil revenues to its Sovereign Wealth Fund (SWF). SWFs are state-owned investment funds with diverse investments in real and financial assets, along with alternative investments in private equity or hedge funds. They usually arise when governments have budgetary surpluses and are often used by governments during ‘rainy days’ or economic downturns. Kuwait’s SWF is meant for diversifying the country’s economic interests beyond oil, hence, securing its future through diversifying sources of revenue.

The Iraqi invasion and the 1982 informal stock market crash disrupted the Kuwaiti economy. In addition to human atrocities, the Iraqi invasion caused the destruction of basic infrastructure, paralysis of oil production capacity, and misappropriation of government and private assets[15]. Moreover, it caused huge out-migration of labor, destruction of oil wells, and loss of other forms of capital. This shifted the production-possibility frontier (PPF) inwards, owing to the loss of natural capital, physical capital, and human capital.
After the Gulf War ended, the government initiated expansionary fiscal policy by increasing government expenditures and eliminating taxes in order to increase the aggregate demand and to shift the PPF outwards in the long run by increasing productivity. Endowed with Keynesianism and increasing oil prices that financed exorbitant budgets, the government rolled out elaborate subsidy programs to make food, fuel, and housing more affordable. Handouts were also introduced to alleviate income inequality. Moreover, public-sector companies began to offer higher wages. All these measures served to escalate Kuwait’s current expenditures.

Hence, the fiscal rigidities of Kuwait are summarized below:

[3]MacDonald, F. (2020, September 2). One of the World’s Richest Petrostates is Running Out of Cash. BloombergQuint. https://www.bloombergquint.com/global-economics/one-of-the-world-s-richest-petrostates-is-running-out-of-cash

[8]Fiscal Policy for Stability in Oil-Exporting Countries: From the Old Problems to the Challenges of COVID-19. (2021, April 26). KAPSARC. Retrieved 11–11-11, from https://www.kapsarc.org/research/publications/fiscal-policy-for-stability-in-oil-exporting-countries-from-the-old-problems-to-the-challenges-of-covid-19/