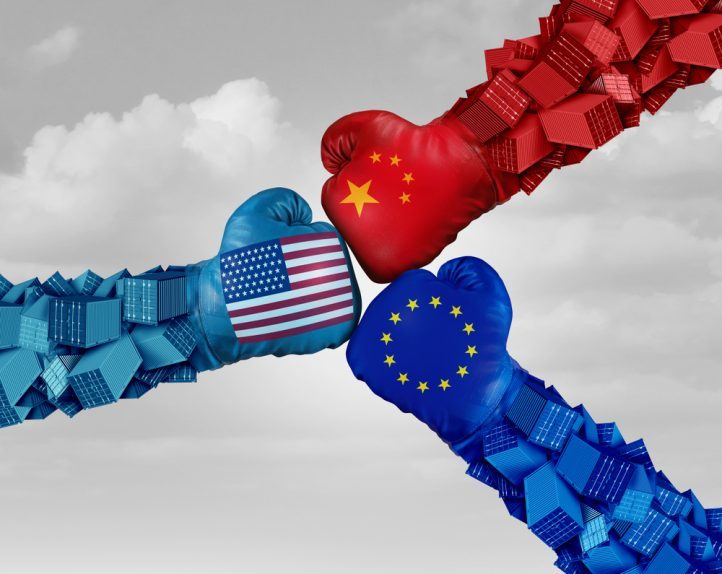 As the wars of guns and explosions fade into history, a new type of warfare is just starting to be born.

The Dollar has held the title of the world’s reserve currency for the last eighty years. What does that mean? The U.S Dollar is used as the primary currency for international transactions around the world. For the Dollar, this achievement came in the middle of the 20th century for practicality reasons. Yet now, it has turned into a political and economic arms race as, for the first time ever, the Dollar may fall from its throne. Before we can evaluate such a possibility, it is important to first understand the history of how the Dollar became the behemoth it is today. There are a couple reasons for this phenomenon.

Due to these reasons, most of the central banks in the world have Dollar reserves. These reserves are employed to finance monetary policy with the buying of foreign debt; 40% of that debt can be bought using the dollar. Thus, to truly appreciate the importance of the dollar, we can evaluate the global reserves as seen by the figure to find that the U.S Dollar makes up 61.8% of the world reserves.

One may ask, why is the Dollar the reserve currency and what does it mean? The Dollar became the reserve currency because in the early 20th century the United States held the greatest amount of gold. Most currencies were backed by gold. Since it was not a practical solution for every country to hold gold reserves, the Bretton Woods Agreement (1944) was reached to use the dollar as a substitute for the gold reserves. Hence, countries could hold reserves in dollars and substitute them for gold on demand with the U.S Treasury. From this, the U.S became the world’s reserve currency with no significance placed on the matter. This all changed in the 70’s when President Nixon removed the U.S from the gold standard. With that change, countries now hold reserves of the dollar, which are backed by the credit and faith of the Treasury, an intangible asset, rather than a valuable resource. The greatest bamboozle in world history occurred. Countries were forced to accept the change or lose the value of their reserves costing trillions.

Ever since, the dollar became an image of stability and trust. That being said, circumstances are changing as American economic strength wanes with greater competition from China, and the European Union. For the first time, there is a real possibility of the American Dollar losing its spot as the world’s reserve currency. Before we can address the possible implications, we must understand the reasons behind challenges from China and the European Union (EU).

The Dollar is used in transactions all around the world and held by central banks for reserves, which makes it irreplaceable. The flow of Dollars though can be regulated by the U.S Treasury preventing American companies or banks from accepting money from certain countries, companies or people. This is what we see today as financial sanctions, which are increasingly being used as an invasive method to punish certain countries. The power of these financial sanctions allows the U.S to dictate U.S foreign policy toward enemies and allies alike.

The downside of being the reserve currency is maintaining the value of the Dollar. The Dollar is decided by free-market forces and is only influenced in times of need by the Federal Reserve Bank (Fed). With the Dollar’s global placement, the Dollar must stay stable in price which prevents the Fed from majorly adjusting it in order to gain benefits from foreign exchange rates. Foreign Powers do not have such restrictions and can manipulate their currencies to gain the benefits from adjusting foreign exchange rates. Although under the World Trade Organization (WTO) such an activity is known as currency manipulation and is illegal, limited action is taken toward accused currency manipulators. Such acts of currency manipulation have contributed to the American Trade deficit.

Even with the negatives elaborated above, it seems both China and the European Union, with their respective currencies, are seeking the mantle of reserve currency. The European Union has increased the Euro’s share of global reserves over the last decade to reach 20%. The real push for change has come after the E.U made unprecedented calls for the removal of the US dollar as the reserve currency, following disagreements with the U.S over foriegn policy with Iran.

The issue arose when President Trump pulled out of the Joint Comprehensive Plan Of Action (JCPOA), commonly known as The Iran Deal. Some members of the JCPOA who were also EU members disagreed with this foreign policy maneuver and attempted to circumvent American sanctions on Iran. The United States did not look too kindly on such an act and responded by threatening economic sanctions on European companies. Although the European’s outrage and calls for change in the world’s reserve currency, the EU lacks a unified political and economic structure to prevent large shocks to the market, which is an essential role as a global reserve currency. Thus, the European Union is far from attaining the necessary financial strength to take over the mantle.

China, on the other hand, has suggested implementing an one world currency which is distinct from all other currencies, yet the politics of such a currency seem impossible. In the meantime, the Chinese seem eager to garner support for the Renminbi to become the next reserve currency. At first glance, the Renminbi seems to be an excellent choice as a market-determined currency under the second biggest economy. That being said, The Renminbi is market-determined in name only. The currency is strongly controlled by the Chinese government to achieve their goals. Furthermore, defying logic, the Renminbi is not the second largest currency in circulation even though it is the currency of the second largest economy. The renminbi is actually rarely used in comparison to the Dollar or the Euro on the global scale. Thus, Renminbi may be far from attaining the mantle of the world’s reserve currency, but China’s moves over the last decade show us they are playing for the long game.

China has been diversifying their reserve currency supplies. This seems to be a hedge against the growing weakness of the American economy and by extension, the Dollar. The politics are also interesting. With less Dollar being held by China, the U.S loses a large holder of its currency which may lower its value because demand has fallen. Furthermore, such an event will reduce the U.S’s influence on China. It is difficult to say to what end are these actions being done for, but it is apparent that the Dollar is facing challenges on many fronts.

Overall, the Dollar falling from the throne as the World reserve currency seems unlikely in the near future. Neither the Euro, nor the Renminbi is ready to take such an undertaking.  That being said, the roots are being laid for an economic battle of the future superpowers for the prize of the World’s reserve currency. Only time will tell what happens next. □