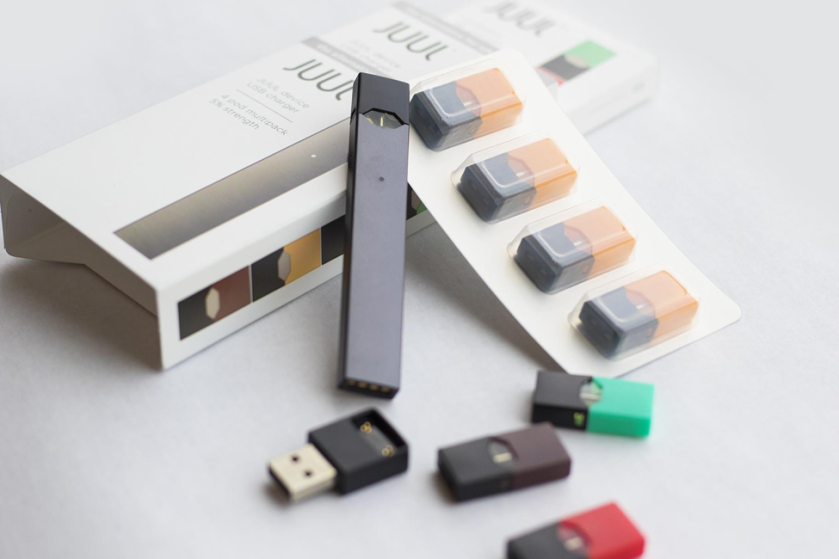 On September 12th, The Food and Drug Administration threatened to pull flavored electronic cigarettes such as Juul off the market to combat the rise of teenage e-cigarette use after investigating the marketing campaigns of numerous e-cigarette companies. The FDA’s concern regarding the teenage use of e-cigarettes reflects the larger trend of Juul’s increasing popularity and dominance in the e-cigarette industry. Since Juul Labs launched in 2015, the company has taken over 72% of the e-cigarette market and, according to Nielsen data, is currently valued at $16 billion. But how did Juul become so popular in the first place?

A major reason why Juul has become more successful than other e-cigarette brands is its revolutionary design. The two founders, Adam Bowen and James Monsees, wanted to appeal to the one billion cigarette smokers in the world. They set themselves apart from other brands by intentionally making Juul’s shape rectangular so that users can get a sense as if they are doing something new. Bowen and Monsees wanted to avoid the familiar roundness of a cigarette, and by doing so, Juul could also appeal to people who had never smoked before. When compared to a cigarette, Juul looks more like a sleek tech gadget, and users do not have to worry about the negative connotations associated with smoking a cigarette. The two Stanford graduates also picked the name “Juul” because the word evokes both “jewel” and “Joule” – the amount of energy required to produce one watt of power for one second.

The response to Juul’s design has been one of almost universal praise. Chidum Okeke (@FlashStriker), 18, from Louisville, Kentucky, said that Juul “looks like the coolest thing ever. Almost futuristic.” In a viral tweet, Okeke also mentioned that, “The green light from the great gatsby was actually from daisy hitting her Juul across the dock..” Users are not only attracted to the design’s aesthetics, but also its function. Juul’s small, compact design means that Juul is a more convenient e-cigarette. “It’s so small, so easy to hide in the palm of your hand. And they’re rechargeable!” Okeke said.

Juul’s popularity and dominance of the e-cigarette market can also be attributed to their effective marketing. Their official Instagram page, @juulvapor, appears clean, modern, and filled with video testimonies of former cigarette smokers who have switched to Juul. But their initial marketing campaign was very different from that of today. Their early advertisements reveal that Juul used the same techniques that old cigarette companies used in the mid-twentieth century to entice people to start smoking. These advertisements marketed the experience of relaxation, sharing, and sex appeal that comes with smoking. It is now illegal for both cigarette and e-cigarette companies to use these suggestive advertising themes, but Juul seemingly ignored these restrictions because of the effectiveness of these strategies, which may have prompted the FDA’s investigation into the company’s marketing campaign.

In another controversial-yet-effective marketing strategy, Juul mainly hired younger models for their advertisements in their early days to attract teenagers. Their campaign was colorful and attractive to a younger audience. It wasn’t until late 2016 that the company decided that all models for their advertisements should be over the age of 35, evolving their marketing campaign to appeal to an older audience. As a result, their new advertisements now appear less colorful and more sober-looking. But their old advertising strategies have still prompted a federal investigation into whether the company intentionally targeted its products to the youth.

Aside from the company’s innovative design and marketing strategies, Juul owes much of its success to investors who helped fund the company’s expansion. Earlier this year, the company launched another fundraising round to help finance the company’s expansion to the U.K., France, Singapore, and Israel. In their newest fundraising round, Juul has raised a total of $1.25 billion in investments – many of them coming from hedge funds and mutual funds such as Fidelity Investments and Tao Capital. One of the biggest firms financing Juul, Tiger Global Management, has invested $600 million in the company. According to Dow Jones VentureSource, the recent increase in funding has made the company the sixth most valuable startup in the U.S., right behind other startups such as, Uber Technologies Inc. and Airbnb Inc. Research company Lagniappe Labs also found that Juul’s price per share in the second quarter of 2018 is 56 times higher than its price per share in 2015. These numbers suggest that when Juul first started in 2015, their valuation was less than $300 million. The overall increase in their valuation and price per share demonstrates the company’s rapid financial success.

In spite of their tremendous success in the past and their current plans for expansion, the future of Juul is uncertain. The FDA’s investigation into the company’s marketing strategy might prove to be a challenge for the company’s future growth. But even if Juul does become regulated by the FDA, the e-cigarette market will most likely continue to grow: The huge demand for e-cigarette products isn’t going anywhere, and many companies would be happy to oust Juul as the king of the e-cigarette market. Silicon Valley investors have recently invested in several related startups that are currently being launched, including Lucy and Ro, two nicotine gum companies aimed at capturing the demand for nicotine products. With an uncertain-yet-promising future, Juul well reflects the turbulent nature of tech industry: Constant innovation, huge growth potential, cutthroat competition, and ever-present uncertainty.

Keller, K. (2018, April 11). Ads for E-Cigarette Today Hearken Back to the Banned Tricks of Big Tobacco. The Smithsonian Magazine. Retrieved from https://www.smithsonianmag.com/history/electronic-cigarettes-millennial-appeal-ushers-next-generation-nicotine-addicts-180968747/

The Truth Initiative. (2018, February 5). What is Juul? Retrieved from https://truthinitiative.org/news/what-is-juul

SPACs – An old idea with a new following. Risks and&nbsp...

Ratings Downgrades and Foreign Relief: An Overview of the Sri...

The Housing Market Boom in a Pandemic

Optimism in the Hospitality Industry