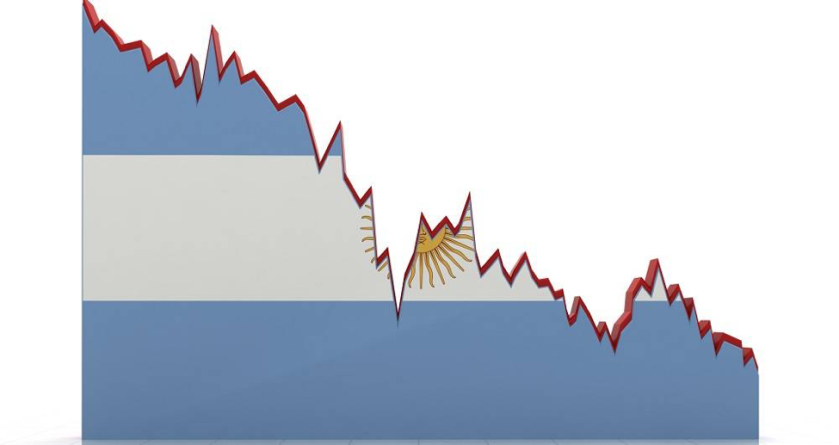 Will the sun set behind the Argentinian flag as a new crisis looms?

Between 1998 and 2002, Argentina underwent through an economic depression. Negative external shocks and incorrect policy measures created the onset of a currency crisis; after a series of subsequent mistakes —ranging from a temporary freeze of baking accounts to default on foreign debt— real GDP shrunk by 28%. Although several years have passed since this horrifying experience, Argentinians might feel that their country is heading towards a similar situation. Peso depreciation, galloping inflation, a twin deficit, and negative output growth outlook are reminiscent of a past situation Argentinians would want to forget.

What happened (this time)?

After years of economic mismanagement under Cristina Fernández de Kirchner, loose government spending financed by the Central Bank’s printing of money was the norm. Inflation was over 40%, currency exchange was restricted, and price controls and subsidies were prevalent. On top of this, a “selective default” on sovereign bonds —that had, ironically, been emitted during the 1998-2002 depression— limited the country’s access to international borrowing.

In December 2015, Mauricio Macri defeated Fernández de Kirchner’s party nominee in a runoff election and became President of Argentina. A believer of orthodox economic principles, Macri was set to get Argentinian economy back on track. His government immediately negotiated with the neglected bondholders and abandoned currency controls. However, it used a “gradualist approach” to reduce government spending, fearing that the consequences of abrupt cuts could severely affect the poor segment of the population. Hence, the government relied on foreign debt.

Initially, everything seemed under control. Although GDP fell by 1.8% in 2016 (mainly because of interest rate hikes in order to fight high inflation) it grew by 2.9% in 2017 —the highest figure since 2011. However, problems began to appear in December 2017: the government commanded the Central Bank to raise 2018 inflation target from 11% to 15%. This was in order to prevent negative effects on growth, as it had occurred in 2016. The Central Bank obeyed and reduced the interest rates, despite 25.3% inflation in 2017. In April 2018, the government mandated a capital-gains tax on foreigners to ease fiscal pressure. However, both measures provoked fears among investors, as they worried about the Central Bank’s willingness to control inflation and the future of their net investment returns. Nevertheless, the worst was yet to come.

As the US Federal Reserve started to increase the interest rates, it hurt emerging economies: investors left riskier markets attracted by US returns. Argentina was still in a very delicate situation due to Fernández de Kirchner’s irresponsible administration. High inflation, a twin deficit (current account and fiscal), and reliance on dollar-denominated debt created the perfect storm —which turned out to occur.

This year, from January to April, the peso depreciated significantly: the peso/USD exchange rate rose from 18.4 to 21.19 —approximately 15%. By May, the Central Bank was prompted to sell USD 5 billion of foreign reserves and to aggressively increase interest rates from 27.25% to 40%. Neither this nor promises to reduce the fiscal deficit worked. Given the dramatic situation, Macri’s apparent only solution was to call for the IMF’s assistance.

In June, the IMF agreed to a three-year credit line of USD 50 billion —the largest in this institution’s history. Evidently, the IMF asked for economic discipline in exchange: Argentina committed to fully eliminate its primary deficit by 2020, reach 17% inflation in 2019, and Central Bank independence de jure. While the markets seemed to be appeased initially, the peso continued to depreciate in August: the exchange rate reached 36.88 in the last day of that month. Furthermore, the GDP shrank by 4.2% in the second quarter —ironically, this is the only effect the interest rate hikes caused.

In the wake of this, the Argentinian engaged with new talks with the IMF. It promised to cut its deficit in 2019 rather than 2020 (with a combination of tax hikes and subsidy cuts). It worked. In late September, The IMF will provide a credit line of USD 57.1 billion at a faster rate. But now, the Central Bank has agreed to intervene the foreign exchange market only if the exchange rate is outside a band (initially, between 34 and 44), which adjusts by no more than 3% on a monthly basis. For now, in October, the peso has slightly appreciated.

On the other hand, Argentinians have not welcomed Macri’s approach to the IMF. For some citizens, the IMF represents the austerity measures that were imposed during the depression in exchange for loans and the controversial measure of cutting the funding in 2001. So far, there have been nationwide strikes to protest the government’s move. Even if the population is appeased and everything goes as planned, a recession looms: GDP growth is expected to be -2.8% in 2018 and around zero in 2019. This situation is particularly delicate for Macri, as Argentina will hold presidential elections next October, and he is expected to run for re-election.

Macri has tried to follow the orthodox economics recipe. Some economists have criticised the gradualist approach or monetary policy carelessness at the beginning of this year. Nevertheless, what must be acknowledged is that Macri has tried to correct the precarious situation left by predecessor’s populist government. Only time will tell if he —and the IMF— have made the right calls in a new crisis that, unfortunately, is far from over.