During the first half of 2018, major economic and social issues in the US such as the trade war between America and China and the Parkland School Shooting have stirred much debate and tension. The following article briefly summarizes these issues and provides diverse  opinions and data on them and on the broader topics they concern.

The 2018 Golden Globes is more than a star-struck Hollywood party. On the red carpet, celebrities wore black in support of the MeToo movement, which fights against sexual harassment and has opens a broader conversation on gender equality. A 2018 survey conducted by The Pew Research Center demonstrates that “59% of women and 27% of men say they have personally received unwanted sexual advances or verbal or physical harassment of a sexual nature, whether in or outside of a work context.”

Various studies on sexual harassment have found a commonality: that the majority of victims choose to remain silent. According to a 2016 report of US Equal Employment Opportunity Commission(EEOC), “common workplace-based responses by those who experience sex-based harassment are to avoid the harasser (33% to 75%); deny or downplay the gravity of the situation (54% to 73%); or attempt to ignore, forget or endure the behavior (44% to 70%).” This muteness can be explained by multiple factors, such as the fear of being revenged by the perpetrator, the shame that society puts on victims, the unclear definition of what counts as sexual harassment and so on. Unfortunately, this silence eventually gives more power to the perpetrator, increasing the toxicity of sexual harassment.

Sexual harassment brings huge economic loss to the people and company involved. On one hand, workers might experience a decrease of work efficiency or simply quit their jobs after being harassed. One research discovers that “eighty percent of the women in our sample who reported either unwanted touching or a combination of other forms of harassment changed jobs within two years. Among women who were not harassed, only about half changed jobs over the same period”.  On the other hand, companies lose large amount of time and human resources in the legal process. The 2016 report of EEOC shows that “since 2010, employers have paid out $698.7 million to employees alleging harassment through the Commission’s administrative enforcement pre-litigation process alone.

At the center of sexual harassment is an imbalance of power between the perpetrator and the victim. This is testified by discovery that at industries where the workers have less bargaining power, sexual harassment are more common. Since the majority of senior positions is held by men, women largely fall prey to the abuse of power. Therefore, in the future, while updating their sexual harassment training, companies need to counteract the imbalance by promoting more women to the leadership positions.

(Parents wait for news about their children after parkland school shooting. Joel Auberbach)

On February 14th, a mass shooting took place at Marjory Stoneman Douglas High School in Parkland, Florida, taking the lives of 17 people. On March 24th, millions of people, especially students, gathered in Washington DC and other US cities for March of Our Lives, a demonstration calling for tighter gun control.

After the shooting, Florida passed a bill which increases the legal age of gun ownership to 21 years old and mandates a 3-day-waiting period before the purchase of a gun. Meanwhile, certain school staffs would be armed and trained to handle an emergence. The federal government has also taken actions. In the omnibus spending bill passed after the shooting, there were two positive measures. The first measure is the creation of FixNICS, which incentives local governments to timely and accurately upload data about gun-related crime to the federal background check system. The second measure is the allowance of Center For Disease Control (CDC) to conduct research on gun violence. Such measures would facilitate the creation of a federal-level background check system and foster people’s understanding about gun violence.

Such researches are indeed instrumental in creating effective gun control policy. Recently, there have been interesting discoveries about the nature of gun-violence. One such finding is that the majority of gun-related death is caused by gun suicide, not gun homicide. When people think about gun-violence, lots of them automatically jump to mass shootings. Thus, when people call for tighter gun-control, it’s usually for the sake of reducing gun homicide. However, according to New York Times, more than 60 percent of people in this country who die from guns die by suicide. Thus, gun suicide shouldn’t be neglected as politicians create policies: “Efforts to ban so-called assault weapons or to reduce the number of bullets that could be loaded into a gun at once would probably not make suicide any less likely.”

Another finding is that gun violence is largely concentrated among certain demographics of certain neighborhoods of certain cities. Using gun violence data in 2015, researchers at The Guardian find that “though these neighborhood areas contain just 1.5% of the country’s population, they saw 26% of America’s total gun homicides. “In Oakland, analysts found that networks of just 1,000 to 1,200 high-risk people, about 0.3% of Oakland’s population, were involved in about 60% of the city’s murders. In New Orleans, just 600 to 700 people, less than 1% of the city’s population, were involved in more than 50% of fatal incidents.” This discovery also suggests a change to the philosophy and measure of gun control: that gun control might become more effective if measures become more micro-based, focusing on certain neighborhoods and groups of people.

Gun control will continue to be debated in US society. Apart from concentrating on reducing mass shootings, policy makers and general public should also give attention to reducing gun suicide and controlling the small group of people that are responsible for the majority of shootings.

*For more data and graphs on US gun culture, please click:

*For more data and graphs on the concentration of gun violence, please click:

Related Major Events: US trade wars with China and the world 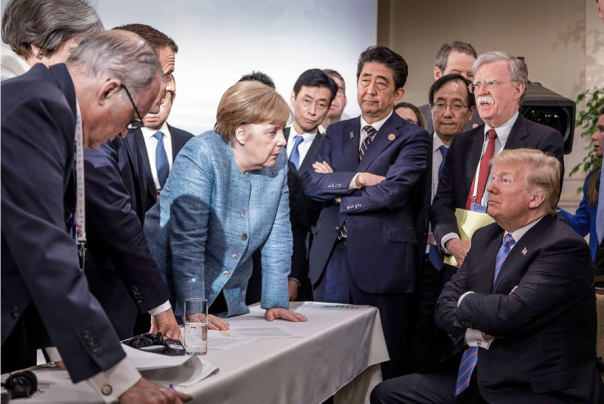 During the first half of 2018, President Trump initiated a global trade war. During his presidential campaign, President Trump promised that he would punish countries who the US has a trade deficit with. Even though most economists argue that trade deficits are neither good nor bad, it’s obvious that the president deems it detrimental. President Trump started the trade war on March 8th, by imposing a 25 percent tariff on steel imports and a 10 percent tariff on aluminum imports, with Mexico and Canada exempted. Then, the President targeted China by putting tariffs on a list of Chinese goods, used in various industries such as energy and medicine. During the G7 summit this June, the president presses further by threatening to put steel and aluminum tariffs on the EU, Canada and Mexico.

The market, the corporate and the academic have started responding. With respect to the market, it has expressed reserved concern. Despite occasional disruptions brought by Mr Trump’s latest trade rhetoric, the stock market mirrors a continuing confidence in the US economy. The S&P 500 index “has gained 2 percent since the end of February, when Mr. Trump began to take action on trade in earnest, and it remains up 30 percent since his election in November 2016. The US economy is indeed experiencing  healthy growth. Consumer confidence and corporate earnings have been boosted by the tax cut. Moreover, it’s commonly believed that the tariff wouldn’t come into effect and reasonable agreements could be reached.

Businesses seem more worried. Jerome Powell, the Fed Chairman, stated that “for the first time the central bank’s business contacts are talking about postponing hiring, investment and decisions. Despite the strong growth of US economy, businesses eventually have to face the higher production cost brought by the tariff. Harley Davidson, the world famous motorcycle brand, recently announced that it would move certain amount of production jobs outside of US. The move is to avoid the EU tariff posed on the US as a retaliation, which could amount to $100 million per year for the company.

Scholars have also been keeping up closely with the trade tension. One research attempts to quantify the trade war’s negative impact by showing how important foreign trade is to every US state. According to American Enterprise Institute, “the dollar value of international trade activities (exports + imports) represented more than 20% of the dollar value of state economic output (GDP) for almost one in three US states in 2017.” Among all states, Michigan, Louisiana, Kentucky, Tennessee and South Carolina are five of the most dependent on international trade. One of the most globalized US industries is the automobile. According to the Center of Automotive Research,  “counter to the incoming Trump Administration’s goal of creating manufacturing jobs, the withdrawal from NAFTA or the implementation of punitive tariffs could result in the loss of at least 31,000 U.S. automotive and parts jobs.”

Up to now, great uncertainties still surround the trade tension. The market, the corporate world and the academic world would have to wait and see what would happen next.

*For more data and graphs US states’ dependence on international trade, please click:

The Facebook-Cambridge Analytica scandal has brought data security into the public’s attention. Through an app it created on Facebook, Cambridge Analytica, a London based political consulting firm, harvested data of 87 million Facebook users. The data was then used to support Trump by sending users fake news on Facebook. After the scandal was exposed, Facebook CEO Mark Zuckerberg responded by vowing to strengthen users’ control of their own data. On April 10th, 2018, Mark Zuckerberg testified in front of the US Congress about the scandal.

Data security has been a concern since the coming of the digital age. However, during the recent decades, the emergence of tech giants such as Facebook and Google has complicated the issue even more. Tech giants control the majority of personal information. Their monopoly power enables them to abuse data in a way that small and medium-size tech companies are incapable of. Therefore, the need of regulation strikes a chord within the general public. EU has taken actions more quickly than the US. Within EU, the updated version of General Data Protection Regulation(GDPR) is planned to come into effect on May 2018. Under the new rule, the company has to ask for the consent of the customer for using the data. If the customer wants to delete the data, the company is expected to comply. The EU’s decision has been applauded. However, certain people point out that the new regulation favors the monopoly. First, even though the reputation of Facebook and Google have been challenged now and then, they are still among the tech companies that customers trust the most. Customers would more likely to give consent to companies that they trust. Second, extra business cost would be produced by the requirement to ask for consent. Not every company can burden the new cost.

Facebook and other tech giants have been responding to the policy change. Currently, non-US users are protected by the data security law of Facebook’s international headquarter in Ireland. Nevertheless, to avoid the new, stricter EU policy, Facebook planned to switch their non-EU and non-US users to be protected by the US data security law, which is less strict than the EU one. Linkedin is said to have made the same decision to avoid the EU’s regulation.

In the future, the US should quickly adapt to the need for an universal, federal-level regulation on data security. Within the regulation, tech giants should be held to a higher standard to counteract the advantage of its position as a monopoly.