Is there a competition to be the financial center of an emerging financial superpower?

large international full-service centers with advanced settlement and payments systems, supporting large domestic economies, with deep and liquid markets where both the sources and uses of funds are diverse, and where legal and regulatory frameworks are adequate to safeguard the integrity of principal-agent relationships and supervisory functions.

The leading financial centers of the world are New York and London while Hong Kong and Singapore lead ever rapidly-growing East Asia. The Global Financial Centers Index places Hong Kong 3rd after London and New York. London and New York rose to the top on the back of geographical advantages. London’s central location means that working hours overlap at some point with all other continents. New York snatched the role of America’s financial center from Philadelphia due to its excellent natural port fueling commercial growth.

There is a variety of reasons that Hong Kong became a financial center. Hong Kong is blessed with a deep natural harbor that has meant that it has always been a hub for trade. It’s economy is ranked the freest in the world and its competitive markets are underpinned by a strong regulatory framework and low taxes. Hong Kong’s laissez-faire tax structure is particularly attractive to firms looking to base themselves there. Hong Kong remains a top international center that is home to 70% of the world’s largest 100 banks. Stability and proximity to China’s massive economy also contribute to continued prominence today. Hong Kong retains its perch at the top but does it face a threat from mainland Chinese cities looking to catch up?

Hong Kong benefited from China’s liberalization in the 1980s due its robust financial and regulatory systems allied to its convenient location. The Hong Kong stock exchange played host to major IPOs for Chinese companies. Hong Kong served as a model for Chinese development and proved to the Chinese government the success of opening up an economy.

In 1997, Hong Kong represented 16% of China’s GDP but today it represents 3%, a testament to the enormous economic growth that China has undergone in the intervening years. Hong Kong is now reliant on trade with China and one-third of inbound foreign direct investment in 2014 came from mainland China. The Chinese government also benefits from Hong Kong’s strong regulatory environment that attracts investors looking for a stable base from which to invest in China. At the same time, the government hopes to reduce its reliance on the Special Administrative Region.

Much of the ability of domestic Chinese cities to become truly global financial centers rests on liberalization of the renminbi (人民币).  The People’s Bank has historically implemented strong capital controls; controlling the flow of the currency. Much of this relates to the Asian Financial Crisis of 1998, where nations ranging from Thailand to South Korea saw massive capital outflows. Concerns over China’s slowing growth in 2014 also led to capital flight and the People’s Bank exerted a great deal of effort and currency in order to prop up the renminbi.

The global financial system still operates by and large in dollars. The Chinese government is looking to make the RMB a globally traded currency and has made signs that it will move away from fixing the currency. The German Bundesbank, among other central banks, has voted to adopt it as a reserve currency; a significant boost to the currency’s credibility as a reserve currency. Hong Kong retains its own monetary authority and its currency, the Hong Kong dollar (港幣), which is the 13th-most traded in the world. Hong Kong has the largest share of the offshore renminbi trading market with a 38.6% market share in 2016 though its market share declined from 43% in 2013. This decline was in spite of a rise in absolute terms. The majority of offshore renminbi trades are FX and currency swaps; looking to help firms investing in China mitigate risk.

In practice, capital controls can entail limits on transfers to overseas accounts and greater regulatory attention paid to companies looking to transfer money abroad. Capital controls are also a factor in the recent investment bubbles in China. Since domestic investors are limited in their overseas investment options despite booming cash flows; money pools in domestic markets. This raises the risk of saturation and the forming of subsequent bubbles.

The internationalization of the renminbi has the potential to threaten Hong Kong’s status as the main offshore center for payments in RMB; but voices within the city maintain confidence. There are essentially two markets for the RMB at present; the domestic and offshore markets. Tight controls over them have not slowed the pace of adoption as assets denominated in RMB are offered in markets all around the globe. If the RMB becomes freely convertible anywhere and investors are not forced to go through offshore trading hubs such as Hong Kong, Hong Kong could lose its preeminent status as China’s financial center. Nevertheless, Hong Kong still retains significant advantages in infrastructure and it would likely take political will rather than market forces to topple the city from its perch. Hong Kong also retains first-mover advantage. If firms in Hong Kong invest in diversifying their offering of financial instruments in RMB, Hong Kong can still retain a hefty advantage. It seems to be suggested that Hong Kong will remain ahead of domestic Chinese cities as long as capital controls are tight. 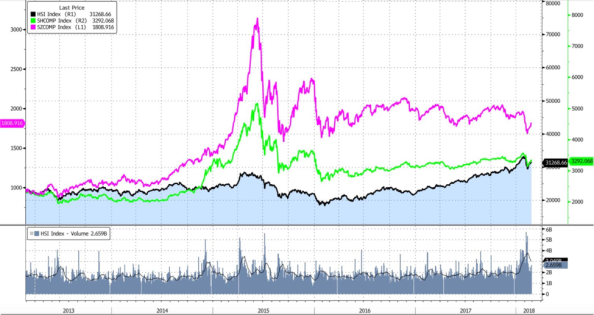 The image taken from Bloomberg above shows how the values of indexes representing the Shanghai and Shenzhen stock exchanges have surpassed Hong Kong’s Hang Seng Index at points during the last 5 years.

Now that many Chinese cities are surpassing Hong Kong’s development, the question is will Hong Kong be toppled from its preeminent status as China’s financial center? There are 3 main candidates:

The State Council declared that Shanghai would be a global financial center by 2020, an ambitious statement that is in keeping with this massive, modern city. Shanghai’s Lujiazui district, low-rise hinterland before the 1990s, is now a gleaming urban landscape dotted with skyscrapers that is instantly recognizable as a symbol of the modern China. Office rents in Shanghai are now the 8th most expensive in the world. However, investors along with government officials talk of Shanghai and Hong Kong being “parallel markets” and do not suggest direct competition. Shanghai listings prioritize state-owned enterprises (SOEs) as opposed to Hong Kong’s range of offshore investment products.

Beijing has not done well in international financial center rankings but retains significant strengths and it’s rise up the rankings reflects its true potential. Political muscle has led to many large corporations basing themselves in the capital. Major SOEs are based in Beijing and financial firms looking to work closely with SOEs view Beijing as an advantageous location. Foreign investment banks tend to choose Beijing to be their Chinese headquarters in order to maintain strong personal relationships with regulatory officials. This is contrast to commercial banks choosing to base themselves in Shanghai, the commercial capital where business transactions are the focus rather than political relations.

Another interesting case is that of Shenzhen. The story of Shenzhen’s growth is in itself remarkable and a testament to the power of foreign investment and free trade. A market town of 30,000 before 1979 is today a metropolis teeming with around 10 million people and another 8 million migrant workers who commute in. Shenzhen positions itself in the market as a specialist in technology. The Shenzhen Stock Exchange mainly trades technology stocks and has seen a surge in recent years as China’s technology sector becomes ever-more innovative. This can be seen in the SZCOMP portion of the graph above. Qianhai is a special zone in Shenzhen set up to test offshore RMB trading with Hong Kong. Shenzhen benefits from close proximity to Hong Kong and excellent transport networks throughout the wider Pearl River Delta; a hub for high-tech manufacturing.

These 3 cities are the major financial centers but China has many large cities that are deepening international financial links. Guangzhou is the center of the Pearl River Delta region, the most densely populated urban area in the world. Dalian and Qingdao are coastal cities that are noted as up-and-coming players. China is such a large country with different regional clusters and characteristics that a single financial center such as London is unlikely.

Wan, A. (2015, April 1). Too Ambitious? Shanghai Aims to be Both Top Financial Hub and ‘China’s Silicon Valley’ by 2020. South China Morning Post. Retrieved from http://www.scmp.com/news/china/article/1753387/too-ambitious-shanghai-aims-be-both-top-financial-hub-and-chinas-silicon