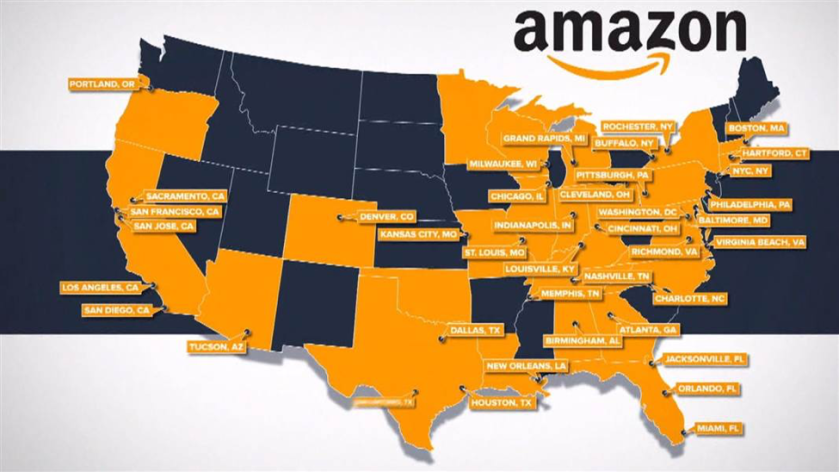 Every city wants to jump on the Amazon juggernaut and be a part of the phenomenon that is revolutionising the way we buy and sell goods. As tempting as it may sound, HQ2 is accompanied with a pandora box of issues and problems that ought to be analysed. As the saying goes, you can’t have the cake and eat it too!

Amazon’s announcement that it is in the active search for a new headquarters to shoulder the responsibilities of its Seattle head office has thrown every major city in the US in a frenzy. Mayors and state governors are offering a truckload of incentives to the tech behemoth to curry favor and win the bid to host Amazon’s would be sprawling new headquarters, rightfully named ‘HQ2’. In exchange, Amazon is promising 50,000 full-time jobs and $5 billion in investment over nearly 20 years. That is certainly an attractive prospect for any city and is bound to improve the standard of living of the local population, in addition to supporting and bolstering ancillary industries.

Amazon has set a predetermined criteria based on which it will assess potential bidders: the city in question must have more than one million residents, close proximity to an airport, time saving commutes, diverse demographics, connectivity and local schools and colleges whipping out potential employees. A myriad of cities ranging from Tucson, AZ to Toronto, ON are vying for the top prize. It is not hard to see why. Seattle remains a locus of tech industries and has state of the art technological infrastructure and a network of highly successful companies, but it is evident that Amazon wants to expand its footprints and watermark its status as the next big thing.

The $5 billion project is sure to infuse billions of dollars into the local economy and provide work for thousands of residents. The winning city is likely to bag the title of a tech-hub, attracting high skilled labor and propelling a wage growth and worker productivity. An influx of high skilled labor is sure to entice other companies to invest in the city too, thereby kick-starting a flourishing investment cycle. It is also likely that other companies would relocate to that city, including employers that team up with Amazon in such avant-garde fields as virtual reality, artificial intelligence and drone enhancement.

Any investment of this magnitude can have a colossal impact on the local real estate market by causing a surge in property prices and thereby swelling the wealth of property owners. An inflow of skilled employees and ancillary businesses that work in conjunction with Amazon will increase local demand for land, subsequently driving up prices and making acquisition of property more expensive.  Mayors are promising renewed spending in infrastructure like metro lines, road development and renovation of airports to strengthen their case. One cannot contend the fact that HQ2 will have several positive spillover benefits that will improve overall well-being.  For example, Dallas, Texas, is proposing to build a $15-billion bullet train line that will connect Houston and Dallas within 90 minutes, making it possible for employees to commute from Houston.

However, it’s time to step back and look at the bigger picture. While HQ2 promises a smorgasbord of positive benefits, it comes with a host of headaches and pitfalls that can cause sleepless nights for city planners and local authorities alike.

Many concerns arise around the tax breaks provided to Amazon and the effect that it will have in the long run. Liberal tax breaks and other such incentives have the hampering ability to deplete or erode a city’s tax base. In order to compensate for this, the city has to increase public borrowings thereby raising public debt.  New Jersey’s $7 billion tax break has received censure and rebuke from politicians alike. In their view, tax incentives are little more than corporate gifts that funnel much needed capital from education, infrastructure and other such programs that ultimately do more for a region’s economy. It has also been noticed that tax incentives are more likely to be bestowed upon established companies, rather than to local start-ups that research has shown are a more significant source of job growth and creation.

An interesting notion to consider is what economists call the clustering effect. Usually, a company like Amazon attracts high skilled laborers specializing in fields like software analytics and data science. Such workers are virtually nonexistent in other cities but attain a ‘critical mass’ in a tech hub. And higher-skilled workers are more productive when they work in proximity to each other, exchanging groundbreaking ideas and innovations.

According to Enrico Moretti, founder of the clustering effect, each new high-tech job can create up to five more jobs resulting in a positive spillover job growth. However, as factories shift towards automation to improve productivity and efficiency, workers tend to be laid off sparking off an uptick in structural unemployment figures. Cities that specialize in labor intensive manufacturing industries should take due note.

Another salient aspect that is worth consideration is the radical shift that will occur in local commuter and traffic patterns. Traffic patterns in the city will fundamentally be altered as thousands of potential commuters make their way to and from the office building complex. “There could be all kinds of traffic problems associated with a burst of construction and a change in location of employment,” Gary Burtless, an economist at the Brookings Institution, told NBC News.

While many may cheer the skyrocketing house prices that Big Tech brings with it, costlier housing means that lower income residents, usually living on rent, are unable to afford it and are forced to move outskirts or to cheaper neighborhoods that are farther away from downtown commercial hubs. In metropolitans like Seattle, essential professionals like policemen, firefighters, teachers and doctors have all moved out and opt to commute long distances to reach their workplace as a result of high costs of living.

And finally, Amazon’s new headquarters can have devastating effects on local wages and employment opportunities. As per sources, the company anticipates to create as many as 50,000 jobs paying an average of $100,000. It is unlikely to be an easy task for any city, no matter how big or small, to provide so many workers at one instance and this is likely to spark off a wage war and drive up competition and increase wages. Note that the national unemployment rate is at 4.1%, nearing a natural rate of employment, implying that almost everybody who is looking for a job, has one. With a tight labour supply, any increase in demand is likely to cause an even larger rise in wages.

Uncertainty revolving around Amazon’s hiring plans is causing some firms to fear that they will not be able to match their remuneration package and may lose talent to the tech firm. All this will lead to prolonged hiring processes and unavailability of skilled workers to fill in key positions.

While the specter of a hike in wages looms over, what is more daunting is the prospect of near monopolization of Amazon as an employer. Currently, Amazon is based in Seattle where potential recruits have other similar sized firms to choose from like Microsoft and Starbucks. However, should Amazon opt to move into a city like Atlanta, which is not heavy in high tech industries, it is likely that Amazon will dominate the market and be the most preferred destination for young skilled workers. Having this cushion of certainty and stability may instill a sense of complacency.

All in all, it is evident that while Amazon may bring unrivalled prosperity and economic well-being to the winning city, it may also cause unmitigated economic problems that have the ability to cause structural unemployment and spark of a wage war with other employers. Thus, while, on the surface, it may seem an enticing prospect to get a piece of the cake that is the Amazon juggernaut, it is prudent to evaluate all the things that come attached with it.