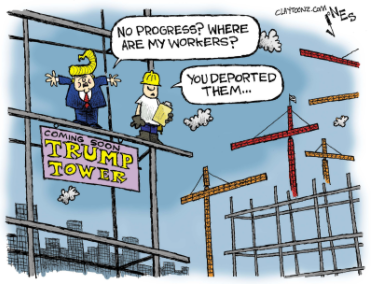 “The economic advice illuminated by past American booms indicate that immigration is the answer.”

From his early moments in the Republican primaries, to some of his most recent presidential addresses, Donald Trump has certainly not spared us from claims of American economic doom and disaster. One of his favorite strategies has of course been the manipulation and exploitation of labor market statistics – but like much of the news coming from the White House, one can consider his interpretation “alternative” in its factuality.

The president has artfully convinced the American people that we are jobless, and, in ways both explicit and suggestive, he has placed blame on immigrants (and foreign trading partners, which I addressed in a previous article).

Not only is the president empirically incorrect about the long-run net-loss of American jobs, and of course the implication of higher unemployment, but worse is that some of his policy prescriptions may damage the consistent economic recovery the previous administration endowed to him.

Broadly, academics and government agencies segment unemployment into four categories: frictional, seasonal, structural, and cyclical. The first three are considered “natural unemployment,” which is to say unemployment that is expected in an economy, and most consider these styles to be benign in nature.

Frictional unemployment being those unemployed because they have recently re-entered the labor force, or are voluntarily switching jobs; seasonal being those unemployed because their primary occupation is seasonally contingent, like farmers. Structural unemployment is trickier and can be obstinately dangerous, but it occurs when geographic or human capital mismatches occur in the economy, where jobs exist but those seeking jobs cannot fulfill them.

Cyclical is the final segment, and it represents those in the labor force seeking jobs, but because of demand deficiency in the labor market, generally due to a recession, cannot find them. This is the malignant form of unemployment, and it is the main concern of policymakers and monetary authorities like the Federal Reserve. Although there is no definitive consensus as to what is considered the natural rate of unemployment, and what is the cyclical, most consider employment above 4.5% as cyclical in nature in the United States.

As unemployment hovers barely above 4.5%, or near zero cyclical unemployment, it demonstrates that labor markets are becoming increasingly tight – as the U.S. economy grows, firms no longer have easy access to labor force participants seeking jobs, making it difficult for them to feed their growth with talented, cheap, readily available workers.

For nearly eight years, with a number of fiscal stimulus bills, zero-bounded interest rates, and avant-garde approaches to monetary policy like quantitative easing, cyclical unemployment has declined to nearly zero (unemployment sits around 4.7%). So indeed, if Trump is right about so many Americans losing jobs to immigrants and outsourcing, it’s certainly not reflected in the data. In fact, if the economy is to continue growing, it will need to draw from some other source of labor to fuel itself, as the unemployed are no longer an option. 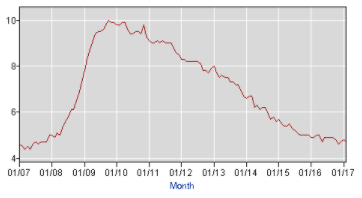 A caveat to assessing strictly the official unemployment rate is that the published rate is not necessarily reflective of the actual number of Americans out of a job. To be classified as unemployed, one must not have a job, have actively looked for work in the prior 4 weeks, and must be currently available for work. To determine if one satiates this criteria, government uses the Current Population Survey (CPS), which samples a basket of American households and generalizes the data. The argument made by Trump and those who support him is that this rate is biased downward because many Americans who want jobs have simply given up looking because the economic situation is so bad that they are disillusioned from searching.

The critics argue that many workers are “marginally attached,” and as they begin to see a healthier labor market, they will choose to rejoin the labor force and search for jobs – this will accordingly quench the economy’s thirst for labor. The simple metric used to corroborate the claim is generally the Labor Force Participation Rate, which measures those Americans who are willing and able to work (i.e. working or searching for work – unemployment rate is just those unemployed over the number in the labor force). Trump and crew say the evidence that unemployment is biased downwards is reflected by the fact that those participating in the labor force has fallen dramatically since 2008, showing the number of workers who have “given up” as growing in number.

However, the reality of the situation is not so simple, and the reason the labor force participation has fallen is not necessarily because there are so many workers who have given up, or feel that they cannot compete with low immigrant wages. Labor force participation in the United States has fallen steadily since the late 90’s where it peaked near 68%. Contractions in the participation rate are not due to long-term disillusionment, but rather due to an aging and retiring baby boomer population, rising rates of Americans staying in education longer, and many other structural factors. 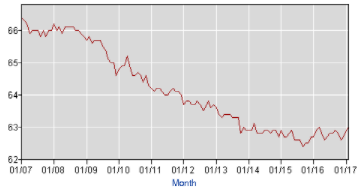 Now that we have established that our economy is nearing zero cyclical unemployment, and that there are probably far less marginally attached workers than the opposition would argue, where is the empirical evidence?

This is fairly easy to prove actually, because wages are generally a solid indicator of labor force slack. When the economy is in recession, and unemployment is high, workers will generally fight for a scarce amount of jobs, competing with each other for employment, and thus bidding wages down. However, when the economy is growing and in full-swing, there is a lack of labor, and firms must compete for limited workers by bidding wages up.

If the economy is growing so fast, and there is an extreme shortage of labor, wages are bid up extremely quickly, and overheating occurs. So far the evidence of labor market tightness is evidenced by a rise in median household income in the United States, as well as solid reductions in poverty. In 2015, household incomes rose 5.2%, and current trends indicate continued growth.

All of this implies that firms are beginning to struggle to find quality labor to continue growth, and thus are being forced to bid up wages to acquire needed talent. If the opposition were correct in their argument that unemployment is much higher than the numbers suggest, and that there are plenty of disillusioned marginally attached workers ready to rejoin, we’d see them re-entering at this point, keeping wages stagnant, or even in decline.

So what’s the big deal? First of all, labor shortages are expensive for American firms. It means that firms need to spend more time, more money, and more resources to find and acquire labor to continue to grow in a booming economy (essentially where we are). This creates a high opportunity cost for American firms, who could be spending those resources on planned investment spending, or other consumption activities that could propel long-run and short-run economic growth.

More immediately, however, is the potential for inflation. As firms bid up wages, increased costs of labor are embedded in the price of the goods and services they provide, driving up prices. As prices continue to rise, inflation sets in, which has broad economic costs. If the problem persists, the Federal Reserve could be forced to interject by raising interest rates, and plunging the economy into a recession.

Either way, it’s essential the economy find a new source of labor, as there is no longer enough labor supply from the unemployed, or from those who have left the labor force.

The source of American economic growth for centuries has been cheap foreign labor, and it can be credited for fueling decades of industrial growth, and later service sector growth, while avoiding inflation. As the American economy ballooned, firms faced less pressure to bid up wages because there was historically a steady stream of labor from abroad to keep wages competitive.

Ironically, as the American economy nears a decade of sustained growth and approaches inflationary unemployment, our president has elected to close our borders, deport needed sources of labor, and consequently inhibit American business growth.

There are plenty of political and sociological arguments for immigration, but the pure economic facts tell us that we need this source of labor. The Federal Reserve, arguably the insulated national economic authority of our nation, agrees, and it was a considerable factor in their decision to begin raising the Federal Funds rate again.

If we are to avoid the disruptive potential of inflation, continue to fuel American economic growth, and slacken our unemployment rate enough to be efficient, we need an expeditious source of labor, and the advice illuminated by past American booms indicate that immigration is the answer.