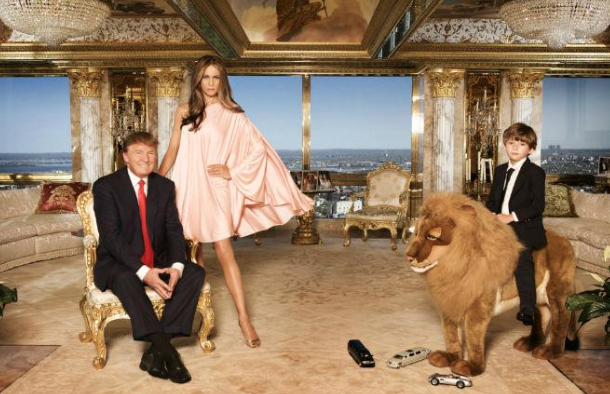 With inequality at record highs, the consequences of economic inequality should be thoroughly examined.

When newly elected United States President Donald Trump appeared on PBS’ Sixty Minutes, the debut to his administration was overshadowed by more than just his stark ideological differences relative to his predecessor. America tuned in to witness its new President seated in a gold-leaf ordained throne, surrounded by the gilded décor of his private residence in Midtown’s notorious Trump Tower. The man of the Midwestern auto-worker, the Pennsylvania coal miner, and the Wisconsin union worker framed himself in a manner as far disconnected from the forgotten man as one could imagine. In perhaps the most perfect of caricatures (riddled with irony), President Trump has come to symbolize the gulf that divides Americans–the crisis in income inequality that marks what may be the dawn of America’s second Gilded Age.

Since 1970, income inequality in the United States has reached its Gilded Age peak. When (tariff-loving) President Hoover left office in 1933, the top 10% of Americans accrued some 45.6% of all income. Today, that number stands at 50.47% (compare that to its low of 33.7% in 1962). Perhaps even more striking is how much money is concentrated at the very top. In 1979, the top 1% of Americans held 10% of all income. When Occupy Wall Street took to the streets, they held some 22%. To put this into perspective, if the top 1% were to hold the same fraction of income as they did in 1979, households in bottom 99% today would make, on average, $7107 more per year (a significant increase of 14% versus median household income).

And there seems to be no end in sight. In addition to abysmal recovery rates since the Great Recession, nearly all the benefits of economic growth have been concentrated at the top of the economic hierarchy. Since 2009, the real growth in income for top 1% of America has been a whopping 37.4% increase, compared to the bottom 99%’s paltry 7.6%. While this does somewhat represent a slowdown in the trend, conditions are still not cheery for egalitarianism.

But why should anyone care? After all, inequality is necessary for the preservation of incentives. Motivation to work would evaporate in a truly equal society. Yet, changing economic dynamics suggest that high levels of income inequality are more than just a regrettable social phenomenon. Inequality may seriously harm economic growth.

In industrializing nations, where physical capital accumulation is the primary engine of economic growth, inequality channels resources towards those who saved more. This makes high levels of inequality not only justifiable, but even desirable for long-run growth. However, in an age of weak demand for investment coupled with a glut of savings, this model may no longer hold. Estimates suggest that, between 1890 and 2000, the contribution of human capital (the knowledge and skills of the labor force) to economic growth doubled. In developed nations, physical capital is no longer the primary engine that spins the cogs of the machine; the digital age is fueled by the educated.

Under such an economy, high levels of inequality may truly raise a red flag. An increasing body of research shows that being born into a lower income household creates perverse incentives behind schooling. Many disadvantaged youths end up choosing the short term benefits of immediate work, and the economy becomes more stratified between the well-to-do and the have-nots. Along with disparities in the quality of healthcare and primary education, the lottery of birth becomes incredibly important. In the long-run, this stratification can lead to depressed investment in human capital as a whole, since large swaths of the population neglect the importance of education and vocational training. Such neglect costs an economy tremendous potential for future growth.

But the can is not just being kicked down the road. For those who believe in the impending doom in the long-run economy, exceptionally weak short-term demand may be also tied to inequality. Weak aggregate demand may be due to stratification; those in the top 5% consume far less than those in the bottom 95%. In an unequal society, such disparity may contribute to weak demand in a still recovering economy. Moreover, this dynamic may even be linked to the cause of the Great Recession. High consumption by the bottom 95% in the face of squeezed wages and rising inequality made the class quickly become overleveraged, helping to form a bubble with an eventual catastrophic pop.

High levels of inequality may also not bode well for investment. Weak recovery rates since the Great Recession have led to speculation that low rates of growth are here today, a theory known as “secular stagnation.” The economy experiences a glut of savings over weak investment demand, one that is so weak that the economy must operate at negative interest rates to sustain itself. Yet, rising income inequality may only serve to exacerbate this condition. The current value of excess reserves banks hold over the Federal Reserve’s requirement stands at $2 trillion: money that is not being used for growth-creating investment. Large companies like Google and Apple have more reserves than they know what to do with. The rich’s propensity to save seems only to be collecting dust in the vaults.

TRAPPED IN THE THIRD ESTATE?

Beyond its effects on growth, inequality is enigmatic as it may perpetuate itself. Higher levels of income inequality are associated with lower levels of economic mobility. Those born poor are more likely to stay poor, even in the face of the popular beliefs surrounding mobility and the American Dream. Even more, political institutions can bend to the increasing influence of the top. But we have been here before. Unfortunately, it took a Depression and World War to end the last scourge of economic inequality.

This, however, is not to say that there is no hope. Governments can do plenty to help mobilize the cogs of the new model for economic growth. But they should also tread carefully; punitive taxes (like those targeting CEO’s) for the sake of face-value equality are unlikely to solve the underlying causes. Instead, reform should target these causes with precision.

For one, governments ought to focus on education. As the skill premium between high school and college graduates increases to record high due to an inability for education to catch up with technological progress, it is up to a strong education system to satiate the globalized world’s demand for skilled workers. A focus on early development issues is a must, as newly born children are being increasingly stuck in their initial conditions. Investments in infrastructure and high-return science and energy projects are promising, especially if targeted at disadvantaged neighborhoods.

Firm size should be another area of concern. A wave of high-profile merges and a steady drowning out of firm-on-firm competition has allowed firms to markup the wages of their employees. Higher firm concentration may be responsible for a large part of the increases in income inequality. As a result of larger firms’ ability to replace the unskilled with machines and to suppress middling wages through the promise of corporate opportunity, increased firm concentration may be responsible for higher inequality. Regulators should be wary with regards to new mergers. However, legislators may also want to take the initiative by promoting small business growth before a new age of monopolies and oligopolies becomes ubiquitous.

Targeting some of the political causes is also a start. Cracking down on campaign contributions, which may have polarized political parties, can help alter the incentives stacked against sensible redistribution policies and inequality targeted initiatives. Moreover, limiting the influence of lobbying may help curb the influence of rent-seeking firms.

While none of these changes alone would help reverse the trend of rising inequality, it does not mean that efforts are in vain. Even modest reforms will help curb the trend not only for the sake of inclusive growth, but also for robust growth. As Occupy Wall Street-invoked leftists and protectionist or nativist right-wingers have displayed, the United States is not immune to dangerous populist waves. Unequal gains from growth will certainly not help quell their anger. America needs to rethink the way it approaches inequality, and, perhaps only then, can the gold embellished orifices of haute-America spread to the forgotten man.