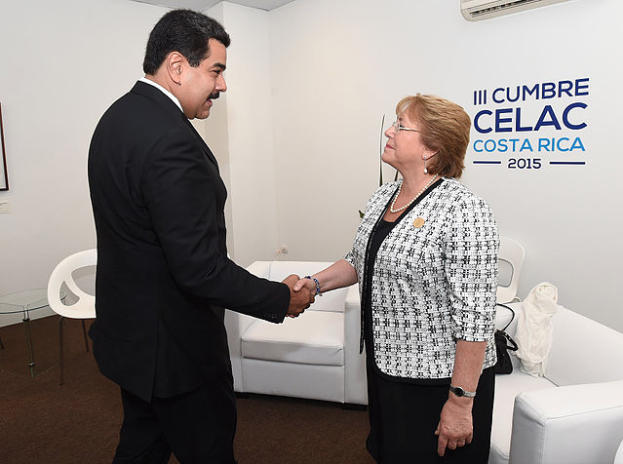 Latin America has seen a divergence in terms of political and economic policy over the late 20th Century. In particular, Chile and Venezuela are interesting cases, having employed varied policies since the 1970s to striking effect.

Today in Venezuela, prices practically write themselves. The nation faces shortages of food and staples, electricity and basic supplies with price inflation expected to approach 500% by the end of the year. A large McDonald’s Fries is said to cost $126 at a sticker price of 800 bolivars.With Venezuelan President Nicolas Maduro’s declaration of a state of emergency last month, many claim that he did so in a ploy to stem the momentum of his opposition and to keep his government in power.

Venezuela is an extreme example of South America’s perpetual political, economic and fiscal struggles, also often seen in Brazil and Argentina, among others. However, Chile, a striking exception, is notably well-off at the present moment. According to the IMF, Chile and Peru are the only countries with positive growth outlooks for 2015 and 2016. Chile’s GDP grew faster than that of any South American nation in 2015, and has a high level of human resource development, a skilled workforce and a HDI of 0.832. It is also perceived to have a very low level of corruption in comparison with its Latin American peers.

Venezuela and Chile have similar geography and are closely located to each other. As one of the most northerly South American countries, Venezuela is closer to Central and North America and Europe. With a temperate climate, a year-round growing season, incredible biodiversity and the largest proven oil reserves on the planet, Venezuela has a lot to offer to investors and to its own citizens. But then why does this divergence in the trajectories of the two countries exist?

While both Chile and Venezuela are democratic republics with mixed economies, Chile has a far greater level of market integration. HumanProgress.org’s ranking of economic freedom (based on the level of government intervention) lists Chile as the 10th freest economy in the world, leading South America. Venezuela, however, ranks last in the world. (Author’s note: this title should probably belong to North Korea, however the nation does not publish economic statistics and hence could not be ranked.)

Furthermore, Chile sees a far greater freedom in terms of its exchange rates. Venezuela’s currency, the Bolivar has been placed at a fixed peg to the USD, and was revised in 2003 and 2008 and 2015 to reflect market conditions. With heavy currency controls in place to prevent capital flight, a thriving black market developed for the currency which more readily reflected the market rate. This means that the Central Bank of Venezuela valued the currency, and in turn the economy of Venezuela to be far more than the markets did. This led not only to the promulgation of an “official” and “real” exchange rate, but also to the use of alternative currencies to the Bolivar. This currency mismanagement led to massive overconsumption resulting in hyperinflation of prices, shortages and political chaos once it was revealed that the Venezuelan economy did not have the capacity to absorb the excess currency that the central bank had created.

This series of events was particularly disastrous for Venezuela for numerous reasons primarily deriving from the excessive involvement of the Venezuelan government in the establishment of prices for goods and services. In the case of an accurately placed currency exchange rate, this might not have been as problematic. However given the issues Venezuela was facing with its currency, the consequences affected every consumer in the country. Furthering the problems it was facing was nature of the Venezuelan economy, structured as it was to be heavily dependent on international trade for revenues and the maintenance of currency reserves. With the 2015-16 plunge in the prices of oil, several oil-exporting nations felt the pinch and likewise tightened government budgets to reflect dropping revenues. However with rampant price inflation, the Venezuelan government was in no position to do so, and thus did not reflect the value of its trade.

In contrast, Chile’s financial stability derives from its more diversified economy, a plethora of trade agreements, carefully implemented market reforms and a managed-floating exchange rate. In addition, several expensive government welfare measures like the social security system were privatized. After years of Allende, Pinochet and the like, Chile rid itself of the regimes which had constrained growth and limited personal and economic freedoms and strove forward, leaving Venezuela and many other Latin American nations behind.

Today’s Venezuela is a consequence of tough choices that should have been made in yesterday’s Venezuela, and the leftover brunt of those lost opportunities. The forces of the markets are being suppressed by government controls, stifling innovation and the free exchange which generates growth with positive incentives. Forced currency controls have wreaked havoc in conjunction with a government drunk on the perceived power of controlling the economy – or killing it trying. Riding the revolutionary sentiment of Hugo Chavez, Nicolas Maduro leads a governmental regime that is losing the trust of its citizens – a trust necessary in the maintenance of a government-controlled economy. There are abundant opportunities for Venezuela to mould itself into the kind of nation that Chile has become and to enjoy the same kind of growth and prosperity. Until then, we can only sit back, watch, and learn how extreme the consequences of interventionism can be.

Rosati, A. (2016|, April 27). Venezuela Doesn’t Have Enough Money to Pay for Its Money. Retrieved fromhttp://www.bloomberg.com/news/articles/2016-04-27/venezuela-faces-its-strangest-shortage-yet-as-inflation-explodes

Country Ranking Based on Economic Freedom. (2015|). Retrieved from http://humanprogress.org/story/2145