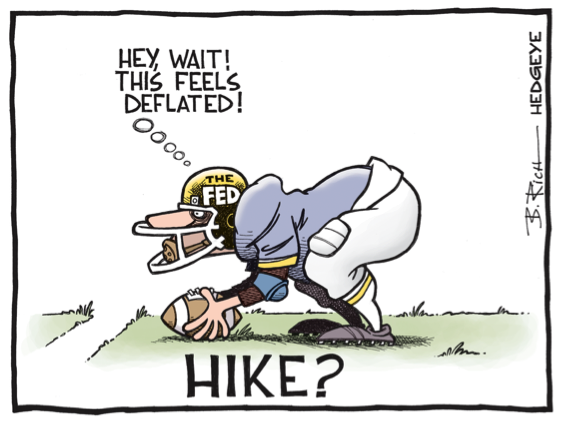 In a monumental swing of swing of monetary policy, the end of free money is near. In a speech to the City Club of Cleveland, the Fed claimed, “… it will be appropriate at some point later this year to take the first step to raise the federal funds rate” away from the current near 0%. With the economy in its current state, nobody quite knows how soon, which naturally leads to a set of questions. When will the hike happen, how quickly will rates rise, and what does that mean for bond markets and mutual funds? 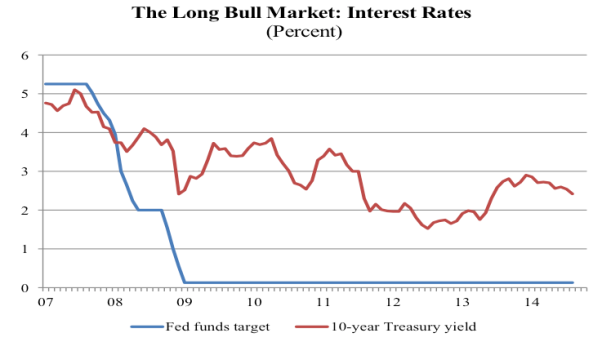 After the ’08 crash, the Fed slammed interest rates to just around 0% in an attempt to avoid similar bank runs and another Great Depression. This caused the Fed to take on many unconventional methods: quantitative easing, credit easing, and forward guidance. The enhancement of transparency, via forward guidance, is an extraordinary new method since in the past the public was mostly in the dark.

The forward guidance manifested itself in two basic pledges—if the Fed were going to raise rates, a shorter-term pledge, and when they would raise rates, a longer-term pledge. However, the Fed has dropped the first pledge, as they have wanted to raise rates since 2010. In March, the Fed altered some of their guiding language to hint at a coming rate hike. The hint came in a dot plot shown below, which maps a precise path the Fed wants rates to follow. For the first time, the public knows the Feds interest rate goals for the next few years and in the long run. 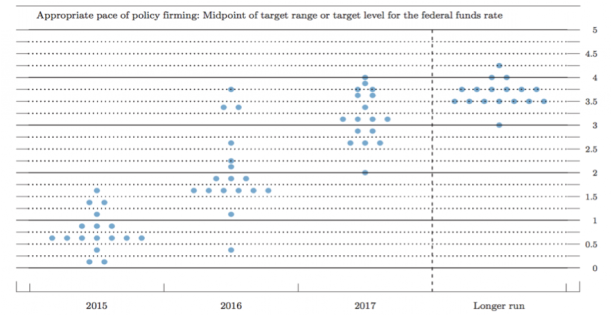 Following that longer-term pledge: when will the rate hike come? Janet Yellen, Chair of the Board of Governors at the Fed, continues to push back the date of the rate hike and hopes to get started before the year ends. Dr. Carey Leahey, NYU adjunct professor and contributor at Decision Economics, affirms Yellen’s sentiments by claiming there is a 60% chance of a rate hike by September, once the Fed’s hesitations quell. However, others contest that the Fed will not raise rates until a later date. Jeffery Gundlach, the proclaimed King of Bonds and CEO at the fund Doubleline Capital reaching $50 billion in assets, believes the Fed will not lift rates potentially until sometime in 2016. Gundlach believes that the economy is “’kind of sputtered out’” and sluggish, given that the 1st quarter showed a contraction of .7% according to the Bureau of Economic Research. In retrospect, this last quarter, reflected a lift of real GDP at 2.3%.

In light of Gundlach’s beliefs, the potentially slow economy in the 1st quarter will only deter the rate hike for a short period of time. Unemployment is sufficiently low and the Fed needs to take action; they clearly want to make a move for monetary policy to maintain discretion and flexibility. The final domino of concerns is the wallowing inflation rate of 1.29% (PCE), considerably below the Fed’s 2% mark. Looking past the rate hike, speculators are trying to find out where the drive in yields will hit hardest, and many are looking at bond markets and Mutual Funds.

Despite disagreements timing, Gundlach, and Leahey, warn of a dramatic fate for bond funds in an interview with Wall Street Week: “The risk is there could be a run on the bond funds, causing further downward price moment. A lot of investors don’t like Treasuries. They’ve been searching for yield and throwing caution to the wind.”

In “Getting to Normal: How Bad for Bonds?” from Decision Economics, Dr. Leahey looks at the growth of mutual funds starting in 1980 to 1983 the credit market debt held by mutual funds increased five-fold up to 10%. More recently, bond funds have been living on a high and mutual funds have been essentially acting like banks, increasing to astronomical sizes. Since 2006, mutual funds debt holdings increased by 100% of GDP to an unbelievable 250% by 2013. Now, when rates rise and adjust, those funds are going to take some losses. 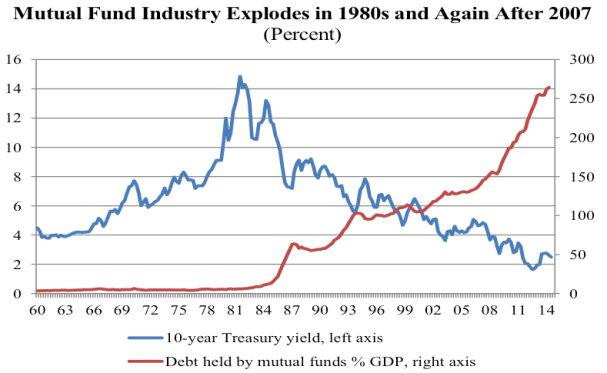 Looking back at the Taper Tantrum of 2013, when the Fed mentioned they were merely thinking of slowing down their purchasing of assets in QE, the markets went ballistic, causing a panic of funds leaving the market. Losses reached up to $275B of outflows exiting this new, massive bond market. 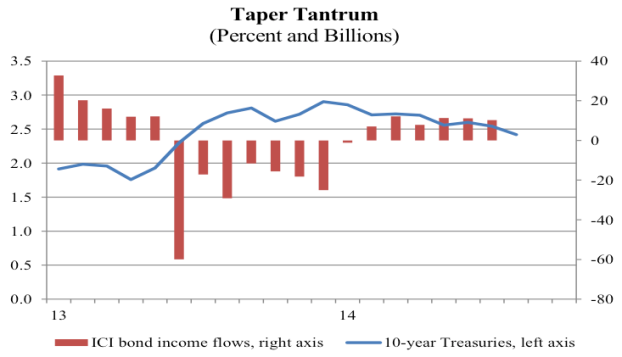 Back in 1994 and 1999, the last time the Fed raised rates significantly, there was only about $90B in outflows and $40B respectively. However, looking back at the last significant rise in 10-year yields (comparable to what we will see in the rate hike coming) in 1967, the debt holdings fell by nearly 20%. Though back then, assets were only at a size of $50B. Given the size of markets and change in yields seen in ’67, the 90s, and action in the Taper Tantrum, there may be even larger losses to come.

A 20% drop in the debt holdings of today’s colossal mutual funds could lead to $900B in losses. Taking in account for price action as well, though an admittedly difficult estimate, Decision Economics made a crude estimate by going back to 2006. At this time, yields were around 5% (slightly higher than what yields are expected to be after the hike) according to Dr. Leahey, and he claims, “…the implied decline in evaluation is about $1.4 trillion. And this would be in addition to an expected $500B in net outflows. Total losses to the industry might approach $2 trillion but would certainly be in excess of $1 trillion.” These estimates do not bode well for bond markets.

Though these estimates are crude, the economy will certainly see a lot of bond market action to accompany the rate hikes.