In spite of Saudi Arabia’s release of a new tourist visa and the kingdom’s increased efforts to popularize tourism, there has been a great deal of international controversy over the kingdom’s human rights violations and hyper-conservative culture.

For the first time since its foundation, the Kingdom of Saudi Arabia has opened its borders to international visitors seeking leisure. Previously, Saudi Arabia only allowed visitors who came to the country for either business or religious reasons, and even then, they were restricted to accessing only a few cities, albeit influential ones. In spite of the limited access to the rest of the country, Muslim pilgrims from all over the world coming to the Kingdom to visit the holy sites of Medina and Makkah have made Saudi Arabia a very popular destination in the Middle East, receiving at least 16 million people every year since 2012.

The Kingdom is famous for its oil reserves and refineries, which continues to be the biggest economic activity in the region. However, just as many of its neighbouring countries such as Qatar,  Oman, and the UAE are doing, Saudi Arabia has started to diversify its main sources of income and has subsequently moved towards incentivizing the pursuit of tourism. This focus on alternative industries becomes apparent when one sees how their oil rents as a percentage of their GDP has fallen by 24 percentage points since 2012. In the same time period, unemployment has been steadily increasing and economic growth has remained relatively stagnant, making the untapped tourism market seem like a fruitful opportunity for the kingdom.

On September 27th, Saudi Arabia released a new type of tourist visa that allows all accepted tourists to stay for a maximum of 90 days per visit. With this new kind of visa, visitors from 49 different countries can apply electronically through an official Saudi website, including the United States, Canada, China, Japan, Australia, and most EU member states, among others. People of other nationalities can apply for a tourist visa through their local Saudi embassies.

On the same day, the Saudi government signed an agreement to invest 4 billion Riyals ($1.07 billion) with Oyo Hotels & Homes to build luxury and mid-scale hotels around the Kingdom, further expressing its desire to boost interest in its tourism sector. The country’s fixed exchange rate policy, which has remained at 3.7500 Riyals/Dollar since 1986 also serves as an attractive tool for foreign investors. This is because multinational companies (particularly in the hotel and entertainment sectors) will face less risk of uncertainty as the Riyal is protected from currency speculation and inflation. 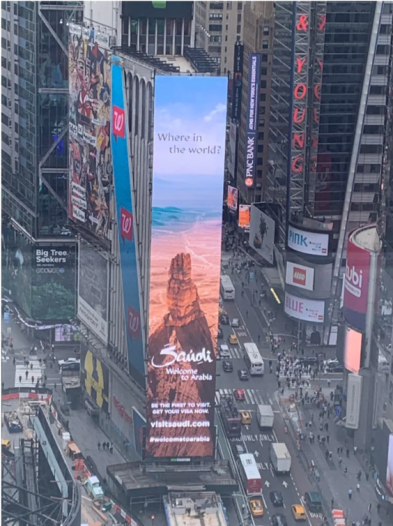 The World Travel & Tourism Council (WTTC) has also signed a partnership with the Kingdom, with the expectation for it to become “a top-five inbound destination, with 100 million international and domestic visits by 2030.” This ambitious goal is backed up by a massive advertising campaign, which has soared around the globe in the past couple of days. Many ads started to appear frequently on websites such as YouTube and Facebook, and there’s even a giant billboard on the One Times Square building all advertising the new tourist visas. On Friday, October 11th, one of the most famous K-pop bands, BTS, held a concert in Riyadh, selling out the 60,000 people stadium.  Similarly, many influencers and Youtubers have been paid to visit and make posts about the country’s culture and natural beauty.

However, many of these advertising initiatives have received massive backlash on social media. Influencers such as Alyssa Bossio, Lana Rose, and Tara Whiteman, as well as various YouTubers and the aforementioned BTS, have received criticism for promoting tourism in a country that has been condemned for various human rights violations such as the mass execution of 33 Sunni terrorists in April and last year’s assassination of Washington Post’s journalist Jamal Khashoggi.

In addition to these violations, another concern about visiting the country arises from its hyper-conservative culture, which practices Sharia Law based on Wahhabism, and has criminalized  acts such as drinking alcohol, the free display of religion other than Islam, and homosexuality. Earlier this year, Saudi Arabia announced a new “public decency code,” which will allow officials to issue fines for offenses related to immodest dress code, public display of affection, queue skipping, playing music during prayer time, amongst others. Even though the country has recently relaxed some of these laws, as it now allows non-married heterosexual couples to share a room in a hotel, many speculate these changes will not be enough to incentivize large-scale tourism in the country. Other countries in the region, such as the United Arab Emirates, have successfully developed their tourism sector by relaxing some laws in relation to alcohol and religious freedom, increasing the number of visitors in the cities of Abu Dhabi and Dubai.

Nevertheless, in spite of these concerns regarding human rights violations and Saudi Arabia’s hyper-conservatism, the kingdom of Saudi Arabia has reported that it had already received 24,000 tourists through the new visa system in the first 10 days after they have become available. Whether the implementation of tourist visas makes a significant change in the economic structure of the country or not will be something to look out for in the months to come.