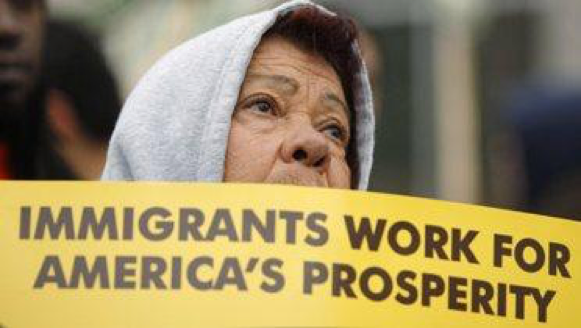 How do immigrants in America altogether play the role in the national economy?

Immigrants have embedded in the story of the United States, as a country built by immigrants. Since the President Trump accused China of “stealing” American jobs, the issue of immigrants’ employment has again been put under the spotlight. A kind of worry and fear of more intense competition and the loss of jobs was evoked in American society and accumulated to unwelcoming attitudes towards immigrants. Such opposition is unjustified, given that immigrants in fact are doing what is on the contrary—creating jobs, and adding momentum to the economy of America.

Instead of taking jobs, people from China, the country stigmatized as the “stealer” of jobs in America, have invested more than $45.6 billion in the U.S. (O’Keefe, B., & Rapp, N. 2017). The biggest component is real estate and hospitality industry with $16.8 billion, followed by transport infrastructure with $6.0 billion, then consumer products with $5.7 billion and entertainment and electronics with respectively $4.8 billion and $4.2 billion, etc. 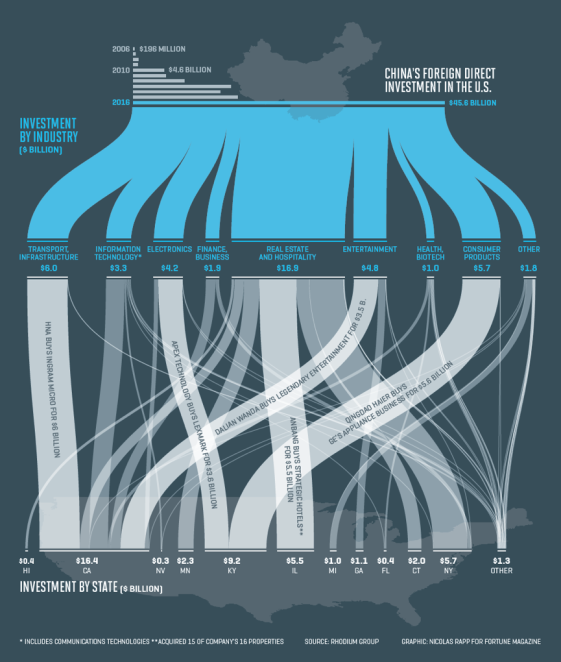 Nicholas Rapp (2017). FDI form China to the U.S., by state and industry [Infographic]. Licensed under Fortune.com.

With such a huge amount of investment, Chinese-founded firms are responsible for 140,000 jobs in the U.S, based on the analysis from Rhodium Group (2017). Apart from providing more job opportunities, Chinese sometimes saved the local economy. Alana Semuels from the Atlantic states that a Chinese businessman in Ohio invested $700 million in 2014 to bring a demised General Motors plant back into life (2017). Over 2,000 workers were hired, and most of them are Americans (2017). On the whole, 18.5 percent of manufacturing workers in Ohio are employed by Chinese companies, according to Brookings Institution (2017).

Additionally, similar cases are not uncommon in other states of America.

The report of Robert Delaney, a US correspondent from South China Morning post, shows that Allentown of Pennsylvania has revived from “rust belt status” with the help of Chinese investors (2017). The Lehigh Valley of the Allentown was once the most advanced pioneer in iron and steel industry, yet it declined partly due to the globalization and the exodus of the locals. According to Robert Delaney (2017), since 2014, Chinese companies like Beijing Oriental Yuhong, a producer of weatherproofing materials of high quality, have started dotting in Allentown, which gradually rehabilitate its economic vitality. He also mentions that China’s Fuling Global, a production factory of plastic tableware in Allentown, hired almost entirely local residents (2017). The company also trains the local labor to gain higher skills, which thus can increase the human capital in the region.

More often, foreign-born persons in states provide labor, which makes up 16.9% of the total labor force in the U.S, according to Bureau of Labor Statistics (2017). Yet in this sense, immigrants can not only further promote the regional economy, but also create more jobs and cultivate more highly-skilled local worker.

As for the concern about less space in job markets left to native-born workers, researchers offer a rather positive view on employment prospect. In Julia Preston’s article posted on The New York Times (2017), a report (National Academies of Sciences, Engineering, and Medicine, 2017) through the collaboration of economists, demographers and scholars in other fields, including those from Princeton and Harvard, believe in immigrants’ positive influence on the economy. “We found little to zero negative effects on overall wages and employment of native-born workers in the longer term,” said Francine D. Blau, the Cornell economics professor leading this voluminous report (2017). This report (2017) also points out that highly-educated immigrants, especially STEM (science, technology, engineering, and math) workers are crucial to the U.S innovation since the their cutting-edge ideas can be put into practice, which can bring about more jobs, and thus raise the living standards as a whole and brighten the economic prospect in the long run. Based on the records by the American Immigration Council (2017), twenty-five percent of high-tech companies founded between 1995 and 2005 had at least one immigrant founder, and over 40 percent of companies in the Fortune 500 in 2010 were founded by an immigrant or the child of an immigrant. Most importantly, the statistics is rising, so is the weight of immigrants in STEM fields.

Interestingly, immigrants may not be paid equal right and respect entitled by everyone else in the U.S., but they are not exempt from paying taxes. The report from the Institute on Taxation and Economic Policy (2017) indicates that, even the undocumented immigrants comprises $11.6 billion taxes in 2013, not to mention the amount of taxes paid by immigrants altogether adding to state and local taxes.

The latest estimates of economic growth during the first quarter reaches 3%, which is an incredibly fast pace since 2015 (Egan, 2017). Such rocketing economic growth in the U.S is accompanied by the rising population of immigrants. Whether or not immigrants share the contribution to the nation’s economy, we all know well.

Delaney, R. (2017). How an American city is cashing in on China’s ‘made in USA’ desire. South China Morning Post. Retrieved 15 October 2017, from http://www.scmp.com/news/china/economy/article/2103525/american-city-cashes-chinas-made-usa-desire