For decades, Saudi Arabia’s economy heavily relied on its oil export industry. With the global economy pivoting toward renewable energy, the Kingdom’s development of a new mega-city, The Line, foreshadows the nation’s bold endeavor for economic diversification.

On July 25, 2022, Mohammed Bin Salman, the Prince of Saudi Arabia, announced to the world the principal designs and visions behind his revolutionary megacity: The Line. Slicing through the Arabian desert and the Hijaz mountain range, two megalithic mirror facades towering 500 meters will stretch 170 km from the Red Sea to Tabuk Province. Shielded from the element, the two facades will enclose 200 meters wide of modular urban spaces built with minimal infrastructural footprint. Prince Mohammed’s megacity is the first phase of Project NEOM. This $500 billion flagship real estate project underpins the Kingdom’s VISION 2030 to transform the nation’s urban infrastructure and diversify its oil-based economy. At the Project NEOM conference for The Line, Prince Mohammed advocated for its vertically layered communities as a radical urban development concept, denouncing the traditional flat, horizontal cities as they remain prone to logistical bottlenecks, urban sprawl and environmental damage. The Line, he stressed, will serve as a model for nature preservation, sustainability and enhanced human livability. With the excavation of its structural foundations initiated in August, the project now presents itself as a great architectural and economical prospect for the future of Saudi Arabia, and possibly, the future world.

Over the past few decades, Saudi Arabia held a competitive advantage in the international petroleum trade. The kingdom, along with 13 other oil-exporting nations, constitute the Organization of Petroleum Exporting Countries. Established in 1960, OPEC members dictate around 40% of oil exports and account for 80% of world oil reserves. Due to the inelastic demand characteristic of natural resources such as oil, consumer preferences and demand shifts lead to greater fluctuation in oil export price and revenue. To retain market share and cushion against such price fluctuation, OPEC legislated a quota-sharing system in 1983 that caps members’ oil production, sustaining an artificial upward pressure on world oil prices. Unintentionally, the quota system incentives members to cheat above the registered quantities for profit maximization, essentially negating OPEC’s command of the world oil price. Such cheating incidents heightened geopolitical aggression between member states, leading up to the Iraq invasion of Kuwait in 1990 due to their excess oil production and illicit oil trafficking from the Al-Rumaylah oil field in Iraq. Evidently, OPEC’s role in stabilizing oil prices regressed in the later century as a result of the hostile geopolitics among member states. 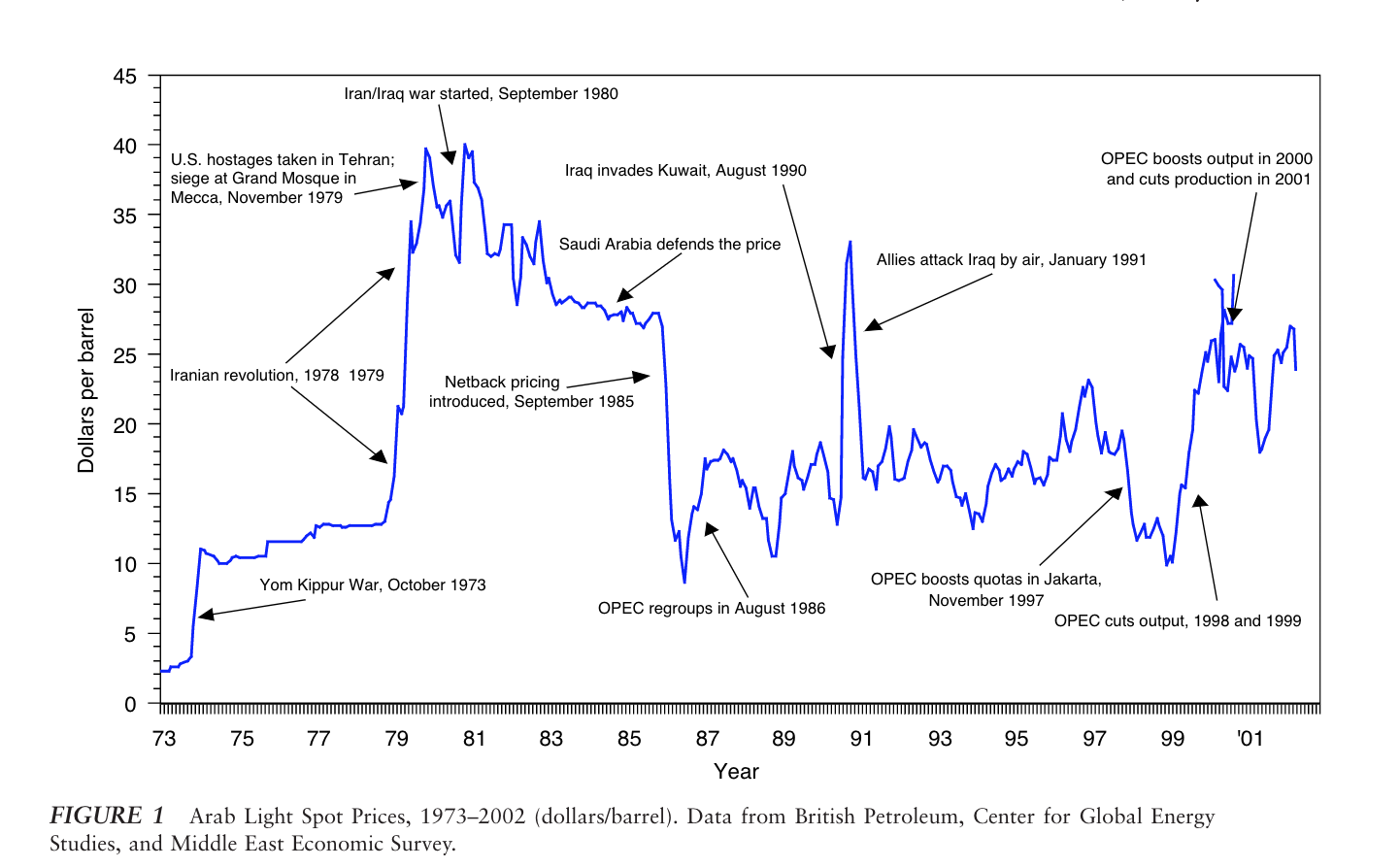 Additionally, international investments in renewable energy soared in the early 21st century. In 2020, the pace of renewable energy investment grew to 12% from 2% during the years after the 2015 Paris Agreement. This expansive growth, combined with the completion of the North Sea oil pipeline that decreased Europe’s reliance on Middle East oil, has substantially weakened OPEC’s dominance of the world’s oil markets. As the largest OPEC exporter of petroleum, the precedent development of the international oil market posed a threat to Saudi Arabia’s oil export economy, incentivizing the Kingdom to devise new economic diversifications in emerging markets such as real estate and tourism.

Nevertheless, capitalizing on its oil reserves in the past few decades helped Saudi Arabia accumulate surplus oil revenue within its Public Investment Fund and therefore has since financed the modernization of the kingdom’s infrastructure. The PIF serves as the sovereign wealth fund of Saudi Arabia, a state-owned investment vehicle that pooled funds from its foreign reserve, bank reserves as well as private investments. In the 1980s, the kingdom’s urban developments coincided with the emergence of western postmodern architectural designs. Thus, the impetus for the Kingdom’s postmodern urban development arises from an imported western criticism of the austerity, formality, and tediously unvarying designs of modernism. In the pursuing decade, such idiosyncratic architectures dotted the nation’s urban landscape with examples such as the Saudi’s National Commercial Bank, completed in 1983. Thus, in defiance of traditional architectural norms, the Line by NEOM manifests itself as a continuity of the kingdom’s postmodern architectural doctrine, infused with a much greater experimentalism on structural and social functionality. The kingdom’s accession to the World Trade Organization in 2005 further reinforced its global position. With trade liberalization, the kingdom liberated foreign direct and indirect investments in alternative markets such as real estate. As such, The Line proliferates the nation’s postmodern architectural ideology as it materializes into the kingdom’s core economic diversification strategy. Educated under western postmodernism, new generations of western investors and developers attracted to the real estate project will fuel the expansion of the Kingdom’s “sunrise industry” in tourism.

Finances of The Line

The Line’s finances of $319 billion from its PIF were buttressed by strong economic indicators. The Kingdom is set to have the fastest-growing post-pandemic economy. This growth was underpinned by the substantial profit from inflated oil prices due to Russian oil sanctions as well as the Saudi central bank utilizing monetary tightening to neutralize the effect of the US Federal Reserve’s high interest rate on its foreign exchange rate.

With the nation’s 2022 inflationary pressure under-wrapped to an average of 2.5%, its real GDP growth rose to around 8.6%, ranked highly among other developed nations. The inflated energy export prices were the main contributors to its current account surplus and an ample foreign reserve of $475 billion which nears its pre-pandemic level. In comparison, the United Arab Emirates with a smaller oil economy accumulates a foreign reserve of only around $130 billion. The surplus reserves could be funneled into the nation’s PIF, used to subsidize competitive industries. One such economic action plan, launched in 2016, was the National Transformation Program, which has since capitalized $1.1 trillion on real estate development and independent megaprojects such as Project NEOM.

Apart from securing domestic funding sources, the PIF initiated multiple international investment partnerships such as its strategic partnership with BlackRock to anchor the firm’s Middle East Infrastructure Strategy in Saudi Arabia. The robust investment framework will boost foreign direct investment into the Kingdom, strengthening its economic diversification and contributing to the PIF’s goal of $1 trillion in assets under management by 2025.

As of right now, the vast majority of its funds were accumulated from its successful oil economy as well as an emerging tourism industry. As the world market oil price soared with the Russian export sanctions, Saudi crude oil exports soared to an average of $1 billion a day with total oil revenue increasing 123% from the previous year of 2021. On top of the lucrative oil market rests the tourism sector, an infant industry steadily growing since the early 2000s, supported by greater capital mobility and the modernization of the nation’s infrastructure. The influx of pre-pandemic tourism poured fresh cash flow into the PIF, with its 2020 revenue peaking at around $20 billion.

The oil economy coupled with its emerging tourism industry and international partnerships funneled sufficient monetary value into the Kingdom’s PIF to finance Phase 1 of Project NEOM, The Line. Yet its completion is a herculean task for urban designers and politicians as various obstacles could materialize, with the most apparent being acute funding impediment and excess contingency costs.

One project serves as a grim outlook for developments with an immense and complex funding structure. The King Abdullah Economic City development along the Saudi Red Sea coast was backed by funding of $100 billion. Yet, security loopholes in the last decade allowed clandestine acts of money laundering by politicians and middlemen that feed heightened political turmoil and investment uncertainty. With the initial construction of the zone via Jeddah tower in 2013, the project has since stalled as a few key backers were imprisoned by the Anti-Corruption Purges of Prince Mohammed bin Salman. 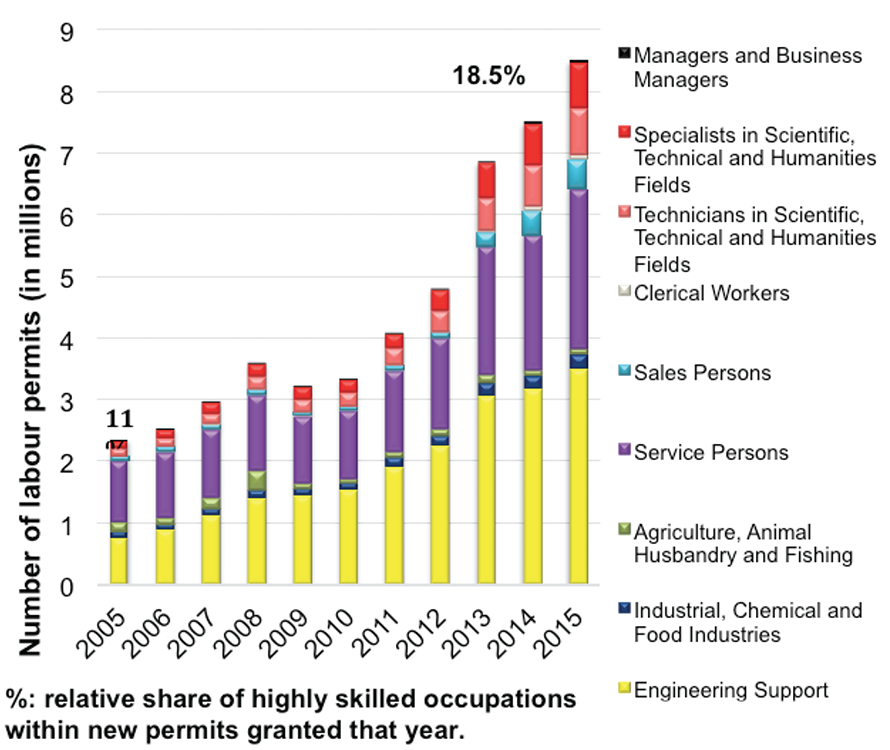 Other technical and social issues could also arise. The figure showcases the continuous inflow of foreign workers to Saudi Arabia, with the majority in engineering support. The reliance on foreign skilled workers for infrastructure expansion would impede its goal of developing technical knowledge in-house and mobilizing its domestic workforce in the long run, resulting in unsustainable economic growth. According to Human Rights Watch, migrant workers in Saudi Arabia are also regularly subjected to delayed wages and detainments. With such claims leading to international condemnation, the nation lost its acceptance among human rights groups.

The death of Abdul-Rahim al Howeiti by Saudi police in 2020 brought the Kingdom’s human rights violations to international scrutiny. As an indigenous resident of the Huwaitat tribe, Abdul refused to give up his property in the Tabuk region of Project NEOM and further criticized the government for The Line’s construction. One example of many persecutions, currently, at least 20,000 members of his Huwaitat tribe are facing eviction due to The Line’s construction. Consequently, human rights violations in labor and social welfare undermine The Line’s appeal to a sustainable international audience.

With Prince Mohammed announcing the initial public offering of the mega project on their stock market in 2024, The Line, when completed, is expected to host nine million people and provide 5 trillion riyals ($1.3 trillion) to the Saudi Stock Market. Various independent reports announced the expected return on investment of around 13 and 14%. However, these values are speculative. The real return of The Line is contingent upon public policies that could sustain an inflow of business and domestic workers to the desert biome of Tabuk. Even such foresight is dependent upon the project’s fruition which calls for stern security oversight of its funding sources; appropriate monetary and fiscal policy to address the contingency cost; as well as the acceptance among the international communities dependent upon the kingdom’s future labor reforms on migrant worker rights and social resolution against the odium of local tribes. As of right now, the kingdom’s focus should be on addressing such factors that would assure The Line’s completion as well as its international acceptance.