Fiscal paradise or tax havens, until the 2008 financial crisis, were generally considered “exotic sideshows” of the world economy. Have you ever heard about ‘carbon havens’ ? [1]Broadly, “havens” are a medium for routing investments or transnational capital flows to countries owing to relative cultural, social, economic, and institutional advantages. The article, first in its series, shall traverse the complex contours of this phenomena.

The statistical measurement of a country’s domestic carbon emissions can differ greatly from the true amounts of carbon involved in producing the goods and services consumed domestically. While the former only accounts for the carbon emitted within a country’s territory, the latter portrays a truer estimate of a country’s carbon footprint. In light of the previous statement, one might want to check the consumption estimates of developed countries and the narratives they offer [2][3]. Developed countries like the United Kingdom, United States, and EU member states, among others, might seem to be on track towards achieving climate goals as depicted in the Climate Action Tracker, but is there an asymmetry here? Have countries really shifted their consumption and its associated production patterns away from carbon?

If countries have not altered their consumption patterns, what is responsible for plummeting carbon emissions? International Relocation and/or Offshoring of Businesses. The plethora of cost-minimizing literature explains this. As Developed countries instituted stricter environment protection laws, firms discovered that outsourcing their production to countries, primarily developing ones, with primitive carbon regulations would augment their international competitiveness. The vast literature on this phenomenon has termed it carbon offshoring or carbon leakage. This issue warrants greater attention, especially due to its greater relevance under the Paris Agreement, which unlike the Kyoto Protocol, applies the principle of accountability for emissions to developing and developed countries indiscriminately.

The Third Pillar [4] offers an explanation to why international climate agreements have failed. Asymmetric power, expertise, and information between countries, as well as a corresponding domestic consensus, has rendered these agreements faulty. These faults have created phenomena like carbon offshoring, which largely arises due to asymmetry in regulations. To what extent, if any, has carbon offshoring really occurred? The article briefly examines the issues highlighted through a literature review, case studies, and a regression analysis.

UNFCCC uses a production-based approach that exclusively focuses on the emissions within the territorial jurisdictions[2][3]. Stavros Afionis et. al. brings out the limitations of the approach by highlighting the inability of the methodology to account for the impact of global trade on emissions. 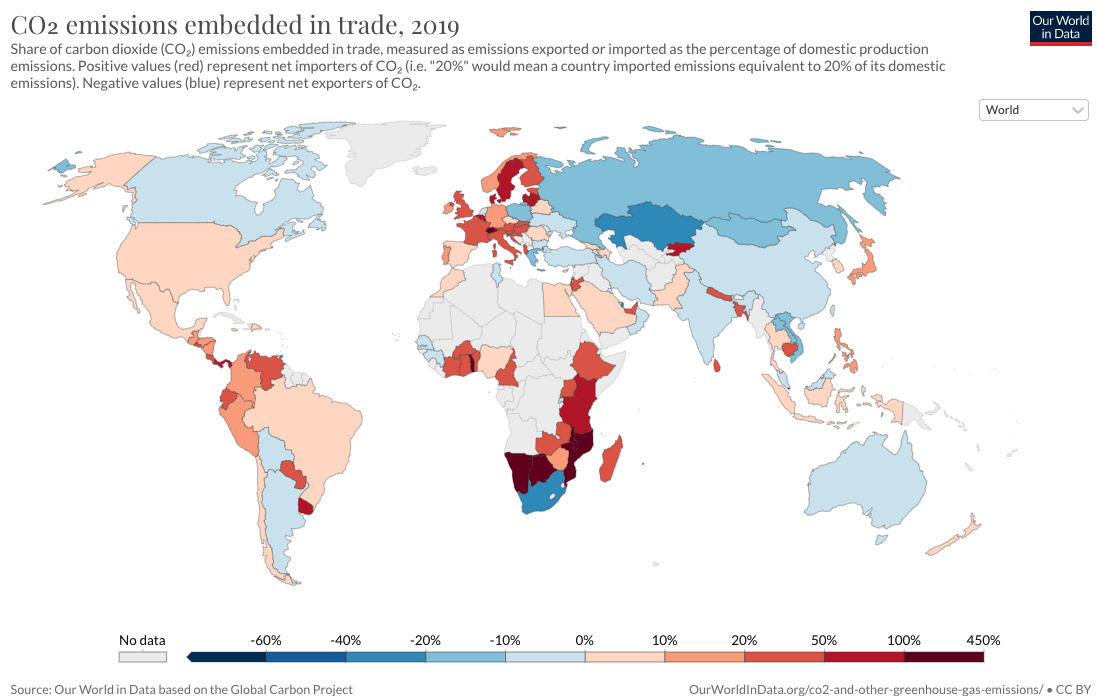 The above world map depicts how developing countries of Asia are net-carbon exporters; the blue color throughout the region suggests that these countries exploited carbon emissions of around 0% to 40% of their domestic emissions in 2019. On the other hand, the developed countries of Europe, South America, and North America have a red shade, which designates them as net importers of carbon emissions.

China, which might superficially seem to be one of the largest emitters of carbon, seems to offer a differing narrative as per this map. As it produces several carbon-intensive goods for other countries,

Is there some other explanation for this observed pattern ?

This is essentially a case of changing patterns of comparative advantage and a manifestation of the factor endowment theory. Developed countries have specialized in the tertiary sector and the developing countries have specialized in labor-intensive industries, mostly the secondary sector ones outsourced from developed countries. Ultimately, when this carbon-intensive output gets exported to developed countries, they naturally have high consumption-based carbon emissions. The primitive emission standards and regulations in developing countries serve as  a source of comparative advantage, with lesser compliance costs. 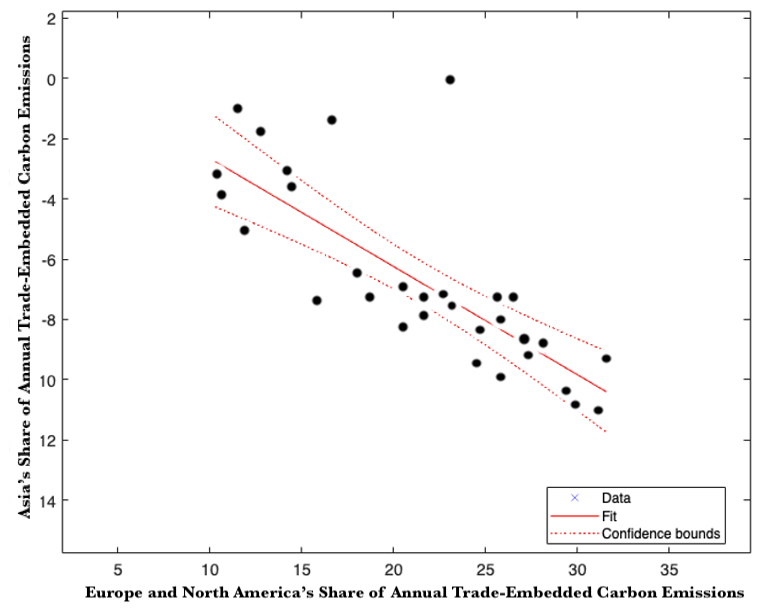 A Working Paper Outsourcing Climate Change[5] concludes that there is robust evidence that U.S. corporations reduce direct carbon emissions in the local markets at the expense of increasing supplier-induced carbon emissions, especially following the 2015 Paris Agreement. This further supports our previous contention that the issue is more relevant under the Paris Agreement than the Kyoto Protocol.

In conclusion, there is a discernible and arguably, justified case for transnational carbon transfers or leakages that have distorted the global perception towards carbon emissions. However, this article presented a rather simplified analysis of the issue at concern, and for a greater breadth and depth in the coverage of the issue refer to the second article of the series that shall consider the case studies of some countries and the potential solutions for eliminating the risks posed by carbon leakages. □