In response to Russia’s recent invasion of Ukraine, the United States and members of the European Union have placed sanctions in an attempt to topple Russia’s economy. The scope of countries to place sanctions on Russia is not limited to the US and its allies; these nations include but are not limited to Japan, South Korea, and the United Kingdom. Through the International Emergency Economic Powers Act (IEEPA), the US president is allowed to regulate international trade after declaring a national emergency in response to any threat to the United States.

With this Act, President Biden issued executive orders to limit trade in Donetsk and Luhansk, the two Ukrainian territories that have been subject to concentrated attacks following Russian failure to capture major in-land cities. This includes limiting the export of defense, aerospace, and technological goods. President Biden also imposed sanctions that limit Russian financial institutions from SWIFT and block the assets of Russian President Vladimir Putin and other elites that have profited from his regime.

The European Union in particular has imposed some of the strictest sanctions on Russia. Along with the limitations the EU has placed on Russian assets, it has gone further through by placing individualized sanctions on Putin and many of his allies. These include restricting Russia’s use of European capital markets, resulting in a loss of business transactions for Russian banks. The bloc is additionally developing plans to reduce its dependence on Russian oil.

Finally, the United States and allies have stated that Russia will be prevented from accessing foreign exchange reserves. However, some have declined to participate in the imposition of such sanctions. One such country includes Germany that has argued that it will not meet its energy needs without trading with Russia. According to Reuters, 34% of Germany’s crude oil came from Russia in 2021. Furthermore, 53% of hard coal received by German power generators and steelmakers also came from Russia last year. Other countries that have not matched the severity of the EU and US’s sanctions include India, Mexico, and Brazil. The sanctions imposed upon Russia have resulted in its economy suffering greatly. The value of Russia’s currency, the Ruble, has plummeted by about 40% against the US dollar and Russian banks are unable to meet customers’ demands for withdrawals. 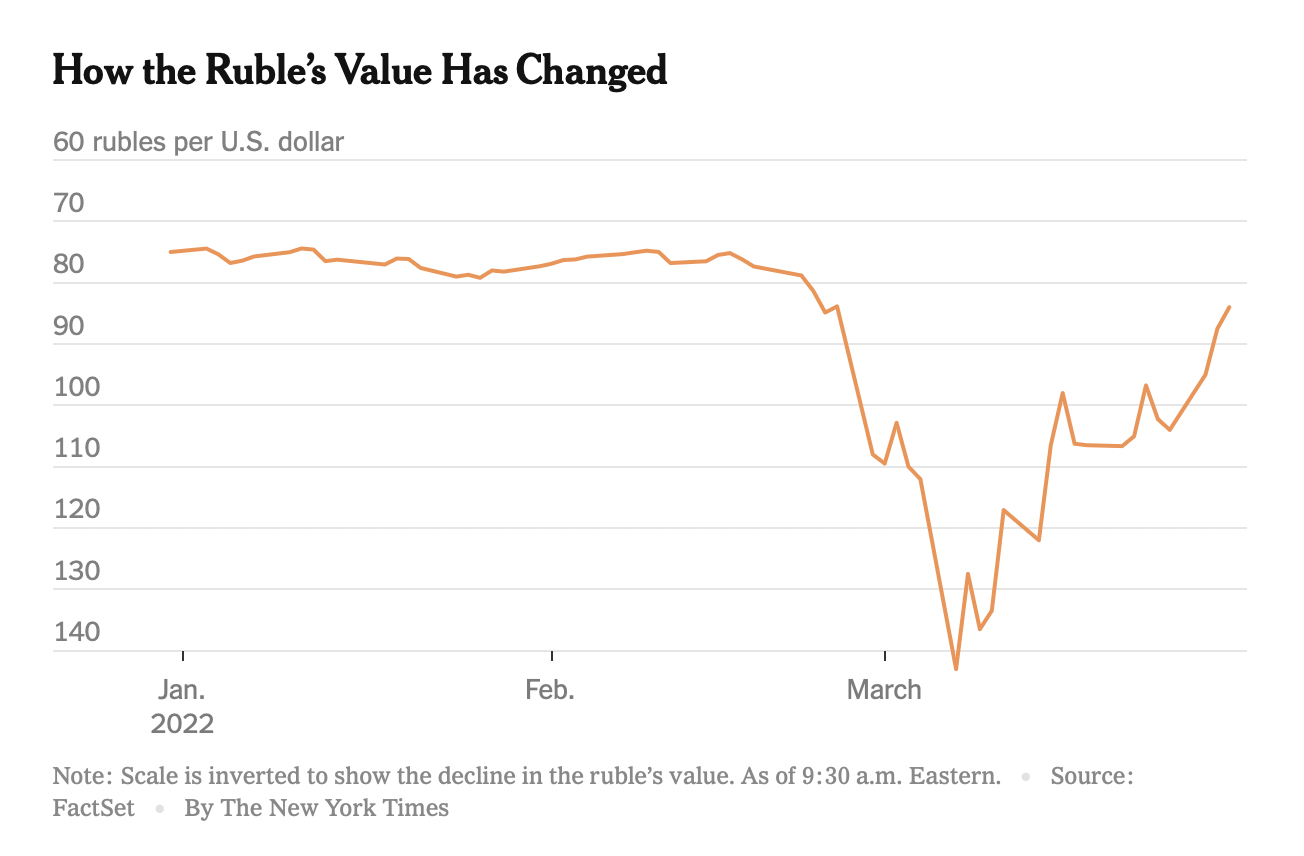 However, the Russian government has put a number of tools in place to mitigate these impacts. The Central Bank of Russia has responded with increasing interest rates to 20%. Russia is likewise working on reducing its economy’s reliance on foreign loans. Only about 16% of Russia’s foreign exchange is now held in US Dollars, down from 40% five years ago. About 13% is now held in Chinese Yuan. The Russian National Wealth Fund has also diversified its trade portfolio by purchasing assets in economies such as China. The Russian government has taken steps to create its own system of international payments and trimmed its budget. Furthermore, Russia is taking steps to manipulate its currency by instructing Russian companies to convert 80% of their foreign currency revenues from exports into rubles. As a result, the central bank can have more hard currency. This has allowed it to become more self-reliant, thereby somewhat mitigating the impact of sanctions. This raises the question of how exactly these sanctions are impacting the Russian regime.

These sanctions are having the largest effect on Russian citizens, as the purchasing power and employment of ordinary citizens has greatly suffered. People are scrambling to ATMs to withdraw their savings and inflation has skyrocketed to about 17.49% as of April. The logic behind sanctions has always been to make the population suffer so that it can put pressure against the government and bring an end to the conflict.

However, historically this has proven to be less effective as it causes the population to increase their objection to the opposing power. This in turn increases nationalism amongst the sanctioned populations and goes against the logic for sanctions in the first place. Populations feel more unified with their home country and have a stronger resistance against opposing forces. On the other hand, many US corporations have been able to make a profit from this conflict. Goldman Sachs, one of the largest investment banks in the world, is taking this opportunity to sell Russian debt securities to US hedge funds while they are low now. This is not in violation of the sanctions since US companies are simply not allowed to do any direct business with Russian financial institutions. Secondary markets, however, were a separate question. As long as the debts were issued before March 1st, they are legally allowed to be traded.

While taking a stand in conflict and foreign policies is important, it is also just as important to recognize how trade limitations have consequences on ordinary people. The current situation in the global economy will grow more complicated as the conflict continues. □