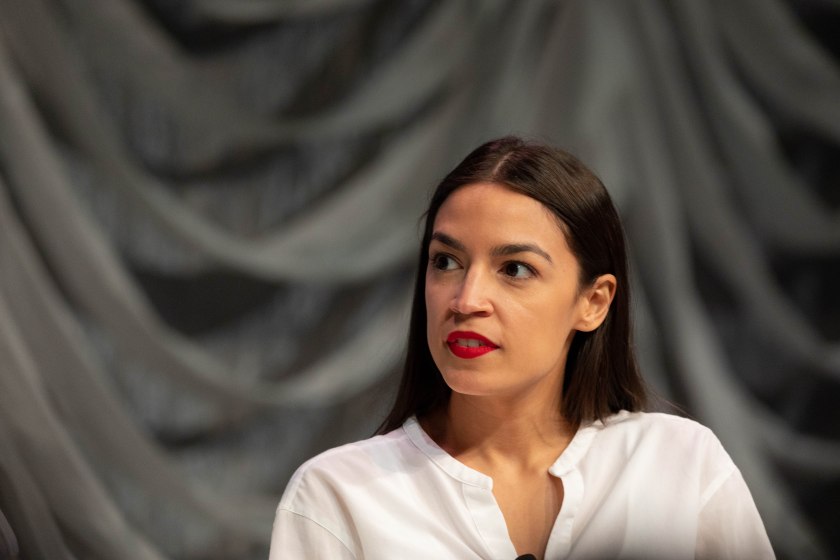 Taking one quick glance online, you’d find people calling Congresswoman Alexandria Ocasio-Cortez’s Met Gala appearance “frivolous,” “tone-deaf,” and  “hypocritical”. Look even further and you’d find that the New York political icon has been accused of ethics violations and muckraking articles have been published about designer Aurora James’ tax history. But what critics are ignoring about Ocasio-Cortez’s Gala statement is that it worked.

“The medium is the message,” Ocasio-Cortez captioned her Instagram post, a photograph of her and Brother Vellies designer Aurora James posing with the dress that made waves on social media and news outlets. The message certainly got through. Google trends show that web searches for “tax the rich” and related topics surged in the wake of the Met Gala, showing the act had exactly its intended effect: to stimulate discussion around an important issue.

While critics from both sides of the aisle raise concern with the notion that Ocasio-Cortez would choose such a venue—that is, one where tickets cost about $35,000 each—to preach about taxing the wealthy, even bringing up the politician’s own personal salary, few seem to recognize the efficacy of such an act and the influence of performative politics.

“I think people have a slightly sort of oversimplified view of politics,” said Michael Laskawy, who teaches The Politics of Public Policy at NYU Wagner. “We live in a political moment where getting attention is a value in itself.”

The polarization in modern American politics is yet again the opponent of progress. The fervent ideological battle between parties ignores the moderate voters who time and time again have proved to be a key demographic in winning elections.

“We do live in an environment in which the electorate is very polarized, but elections still are being determined by these sorts of swing voters,” said Laskawy. “People who are swing voters tend to be, among other things, people that are relatively inattentive voters. So, when you go to the [Met Gala] if you’re her, and you have ‘tax the rich’ on your dress, and you get an enormous amount of attention, you actually do penetrate to a certain number of voters.”

When asked about the outfit, the Congresswoman posted on her Instagram, “I thought about the criticism I’d get, but honestly I and my body have been so heavily and relentlessly policed from all corners politically since the moment I won my election that it’s kind of become expected and normalized to me,” reported Fox News.

Ocasio-Cortez also told reporters, “When we talk about supporting working families and when we talk about having a fair tax code, oftentimes this conversation is happening among working and middle class people [on] the senate floor,” reported CNN.

James echoed her remark, saying Ocasio-Cortez “wanted to make sure that this message was brought into that room and into a group of people who ultimately have to be more willing to be more liberal with their economic values as well.”

“The truth is that a surprisingly large number of people that attend the Met Gala probably are perfectly well in favor of taxing the rich,” said Laskawy.

AOC’s prowess on social media has also pushed her into the spotlight and into conversations everywhere. The politician who was born and raised in the Bronx has become a household name and a target for conservative politicians and media outlets. Her appearance at the Gala was a topic they quickly pounced on. Donald Trump Jr. took to Twitter to call Ocasio-Cortez a “fraud.”

Is it really fraudulent, though, for the Congresswoman to use her platform to amplify her message? Or is that just her job description?

Economic Outlook in the U.S. Bleak Among Continued Concerns...