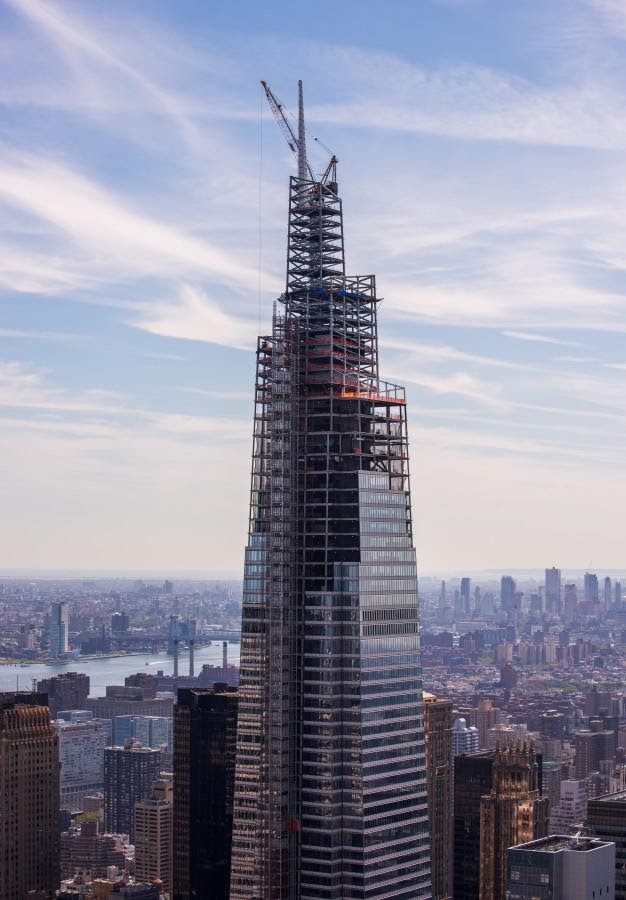 Before COVID-19, New York City was experiencing a 30-year high in new office construction. This real estate boom came with a dramatic change to Manhattan’s skyline. In 2012, the Empire State Building was the tallest in New York. By 2020, six buildings in Manhattan had been constructed that surpassed it. Though in part due to a wave of super-skinny residential towers, 3 of these buildings were primarily for corporate use.  When COVID-19 hit the city, workers were sent home and it is still unclear when, if ever, they will fully return. With at least a temporary drop in demand for office space, will New York’s skyscraper boom grind to a halt?

On March 29, Kastle Systems, a major building security services provider, reported that 24.2% of employees in 10 big U.S. cities have returned to their offices, while New York Mayor Bill de Blasio announced a May 3 target for 80,000 municipal workers to return to theirs. However, this movement may not be a popular one. Last month, the American Psychological Association reported that 49% of adults feel uneasy about returning to in-person activities when the pandemic is over. This number only decreases to 48% for those who are vaccinated. This could be in part due to worries over the efficacy of vaccines, with one worker explaining “we still don’t know how effective they are against the variants.”  Schedules appear to be a major concern as well. In a survey of 1,000 adults conducted by Envoy, a workplace technology company, 48% of participants said they wanted to work a hybrid in-person and remote schedule, while 41% even said they would take a small pay cut to be able to do so. While in-person work has been slow to recover and workers are hesitant to return, real estate speculation has remained mixed.

In 2019, New York City had another filing for a supertall—defined by the Council on Tall Buildings and Urban Habitat to be taller than 300m (984 ft)—building: J.P. Morgan’s 1,322-foot rebuilt offices at 270 Park Avenue. In 2020, New York’s tallest filing was for 23-14 45th Avenue, a 524-foot mixed-use development in Long Island City. This coincided with a 16.8% drop in overall new building filings. However, many are optimistic about the city’s future. In November 2020, RXR Realty and TF Cornerstone filed an Environmental Assessment Statement for a 1,486-foot mixed-use development in Midtown East. If approved, the building is expected to be completed by 2030. This past February, Governor Cuomo announced the adoption of a general project plan for the Empire State Complex. Situated around Penn Station, the development would include five supertalls ranging from 1,010 to 1,300 feet and would feature an expansion of Penn Station as well as space for commercial offices, residences, retail, and more. The New York Governor believes the project itself can spur change, claiming “the Empire State Complex project represents the next great investment in our effort to rebuild and expand this crucial piece of our state’s infrastructure and will support economic growth in New York City and across the entire state.” While these projects are betting on a long-term recovery, there is some hope it will come sooner rather than later.

Historically, skyscraper growth has been associated with two primary indicators: urbanization rates and real GDP growth. New York City’s population has dipped since the onset of the pandemic and with work from home trends it is still uncertain to what extent economic recovery will lead to urban office use. However, some supertalls have been able to continue business during the recession. On January 27, SL Green Realty Corp. announced two new leases for a combined 43,384-square-feet of office space in One Vanderbilt, a supertall in Manhattan that opened in September 2020. The building’s occupancy rate, now reaching 73%, gives hope that similar buildings can be successful even in this environment. Executive Vice President and Director of Leasing and Real Property at SL Green Steven Durels explains his positive outlook: “Leasing velocity remains strong with seven leases signed and multiple leases in negotiation since the on-set of the pandemic. This exceptional tenant demand is affirmation that One Vanderbilt has set a new standard for world-class office design.” With direct access to Grand Central Station, a 30,000 square foot tenant-only amenities floor, and the opening of esteemed chef Daniel Boulud’s ‘Le Pavillon,’ One Vanderbilt undoubtedly sets a high standard for office buildings. However, what may be making the difference is SL Green’s price flexibility. For mid-pandemic lease negotiations, Durels noted that he had to include “a bit of erosion” from the original rent as well as offer benefits such as periods of free rent, citing that tenants “are more sensitive to preserving their cash” than before the pandemic. Meanwhile, 66 Hudson Boulevard—better known as “The Spiral”—will top out at 1,041 feet and has remained 50% leased since the start of the pandemic. The tower will come with state-of-the-art facilities and cascading, greenery-filled terraces on each floor. However, Rob Speyer, CEO of Tishman Speyer who spearheaded the project from its inception, admitted “we haven’t lowered our asking rent.” Supertall buildings can continue to attract tenants in a post-COVID work environment, but they may have to offer prices to match the market and standards as high as their spires. □