Despite the decline in Super Bowl viewership in the last couple of years, the price for a 30-second advertising spot has kept increasing drastically. What makes this event so appealing for advertisers?

This year, the 54th rendition of the Super Bowl, which is expected to be one of the most televised events of the year, garnered the attention of approximately 102 million viewers globally. With so many eyes glued to their screens, it is not a surprise to expect the cost of advertising for the event to be incredibly high. This year’s price for a 30-second spot averaged US$5.6 million, or $186,666 per second, making it one of the most expensive events for television ads in modern history.  A question that arises regarding this phenomenon is why the prices of Super Bowl ads increase, despite an evident decline in viewership. This has caused many to call Super Bowl ads to be “not worthy” and “overpriced”.

Last year, the Super Bowl LIII  hit a record-low viewership in recent years, garnering the attention of 98.2 million spectators, a sharp decline of 14.1% from 2015’s Super Bowl XLIX, which had 114.4 million viewers. Despite this fall in viewership, advertising spots for the event kept rising in price at an incredibly fast rate, as 2019’s average price for a 30-second spot totaled US$5.3 million, which is 24.7% higher than 2015’s price of US$4.25 million. These prices have all been increasing at an exponential rate ever since 1994, the first year in which a 30-second spot managed to reach the US$1 million price tag. By 2010, the average price was US$2.95 million, meaning that commercial spots have almost tripled in price in the span of 16 years. 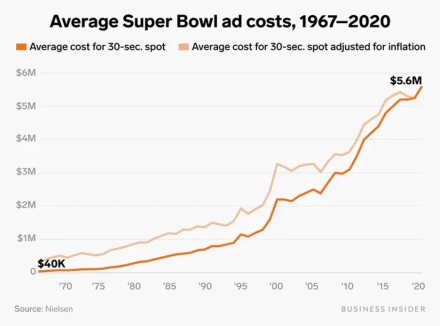 Another confusing aspect of the Super Bowl ad pricing puzzle is brought to light when compared to other major live sporting events held globally, that have seen  higher viewership rates in recent years. For instance, the Russia 2018 FIFA World Cup finals had a total of 1.12 billion live spectators, and the 2019 League of Legends Finals surpassed last year’s Super Bowl, with a total of 100 million viewers. Despite this huge difference in viewership, prices for ad spots in these other major events seem to be significantly lower than for the Superbowl. As an example, the 2018 FIFA World Cup finals, the most-watched live sporting event in history, had 30-second ad placements in Fox Sports worth US$437,707. Even though ad placements are different from country to country due to the different sports networks, it is still possible to compare viewership across countries. CenturyLink, a company that broadcasts transmissions (with in-game ads) to most countries in North, Central, and South America, reported that they reached about 300 million viewers during the final game. Given this estimation, we can approximate that each ad managed to reach about 685 viewers per dollar spent, while Superbowl ads this year averaged 18.2 viewers per dollar, an abysmal difference.

These numbers suggest that the price of ads is not a matter of the number of viewers reached, thus other parameters could be analysed to measure their success. One common way companies are tracking the impact of their ad spots in real-time depends heavily on social media platforms – most prominently, Twitter. By tracking the number of mentions during certain periods of time, companies are able to gauge the audience engagement rates. This strategy was powerful enough that Twitter itself coined a term for this phenomenon: “Brand Bowl.”  Twitter describes the “Brand Bowl”  as a competition between different brands by presenting awards in various categories by the online effect they caused. For example, the “MVP” award is given to the brand that drives the most conversation on the platform, while the “Fan Favorite” award is given to the brand with the most positive comments. The Super Bowl, by far, is the only sporting event that sparks as much conversation over television ads, meaning that each viewer reached by the Superbowl will be more engaged with the brands they see than in any other televised sporting events. This phenomenon is likely to take place due to the “stop-and-go” nature of American Football, which merges ads into the regular flow of the game.

The second parameter which helps us solve the Superbowl ad pricing puzzle is revealed by revisiting once again the FIFA World Cup statistics, but this time looking at the womens’ tournament. Last year, the finals for the womens’ cup had a viewership of 260 million viewers, which is a modest number for an international event, especially when compared to the men’s FIFA World Cup Championship. However, the 30-second ad-spots for the event had a price of US$506,665, which is 15.8% more than for the male finals. This might seem puzzling at first since the number of North American viewers for the event was relatively the same, yet the price was not. However, audience composition is a factor that is often overlooked in discussions about ad pricing. If companies know that their ad will reach an audience that will not only engage with it, but that also has a very predictable demographic composition, it becomes relatively easier to tailor the advertisements to connect with its viewers, making this “specificity”  a factor which elevates price.

Some other papers attempt to attribute the success and price of Superbowl ads to a general ad-watching culture in North America, despite the data used to predict such behavior being still scarce and difficult to concretize. Thus, it is not an anomaly that the prices for 30-second spots during the Superbowl might be at an all-time high while viewership is at a steady decline, but the increasing levels of engagement with the ads and the “specificity” quality of such make them more fairly priced than what many may think.

Pei, Annie (2019, April) This esports giant draws in more viewers than the Super Bowl, and it’s expected to get even bigger. CNBC. Retrieved from: https://www.cnbc.com/2019/04/14/league-of-legends-gets-more-viewers-than-super-bowlwhats-coming-next.html

Carabtree-Hannigan, James (February 2020) Super Bowl commercials 2020: How much does an ad cost for Super Bowl 54? SportingNews. Retrieved from: https://www.sportingnews.com/us/nfl/news/super-bowl-commercials-cost-2020/az0f3yw0las1wz2h3lwflq8t