China’s response to these tariffs could shed light on its ability to restructure its food trade in volatile global markets and provide insight into future food sources and the road ahead for the global food market.

China’s rapid rise and growth to a global superpower has distracted from the many problems that still plague it. The 1.3 billion Chinese population that has provided the country with near limitless potential for growth also presents the largest difficulty in ensuring every citizen’s basic needs are met. In fact, one of China’s greatest constraints in overtaking its main rival, the United States economically, comes from a surprisingly fundamental place: agriculture.  Changing demands and supplies in China’s agriculture market has caused a mismatch within domestic markets, forcing the nation to respond by developing flexible agricultural trade relationships with foreign markets and dramatically increasing its food imports in the past decade. In light of the increasing volatility in international markets led by unpredictable U.S. trade policies today, it is worth examining how China’s agricultural trade with foreign markets will change to meet its changing needs.

China’s natural landscape and history has made it such that farmlands today exist in small and scattered pieces– 260 million households run 120 million hectares of farmland, meaning the average size of a household’s land is less than 0.5 hectares. Over 90% of its farmlands are smaller than 1 hectare, translating to difficulty in coordinating mass supply of goods and cultivating land-intensive crops such as cereals.

Moreover, arable land in China is rapidly disappearing due to industrialization and worsening environmental conditions. The situation is exacerbated by an increasing demand for livestock and feeding grain: as China’s economy grows ever larger, Chinese diets are becoming more westernized with a marked increase in meat consumption. Compared to 1990, the Chinese consume almost three times as much meat now while milk and dairy intake increased by almost 4 times from 1995 to 2010 in urban populations and 6 times in rural populations. The demand for processed foods has also risen by about two-thirds between 2008 and 2016.

These rapid changes and the comparatively slow development of the agricultural sector put pressure on the country to increase imports despite initial insistence from the government on food self-sufficiency. In addition, the rising wages that came with the development of the Chinese economy as well as policies like the minimum procurement price aimed at increasing farmer incomes caused prices of Chinese produce to be consistently higher than those in the global market. These set the foundation for China’s transition from an agriculture net exporter to a net importer and its large food trade deficit today. It also means that China’s food supply will always be subject to unpredictable global markets and geopolitics, at least until its agriculture scene develops enough for the country to meet its domestic demands.

Since the country’s turn to foreign markets for food, it has made many changes in trade relations that reflect the volatilities in geopolitics and emerging markets. In particular, the ongoing U.S.-China trade war has put the flexibility of China’s food trade strategy into the spotlight. The question we are looking at here is less about China’s export profits that will be lost due to U.S. tariffs; rather, we are interested in China’s response to these tariffs and  its percieved ability to restructure its food trade in volatile global markets. This response would also provide insight into future food sources and the road ahead for the global food market.

To analyse the resilience of China’s food market, it is necessary to examine its old agrofood relations with Asia. Asian economies have long been closely connected– the vast resources and land coupled with geographical proximity gave rise to deep trade relations and agriculture interdependence in the past that still stand today. China has imported food from Thailand and Vietnam since the eighteenth century and has grown to become a major player in the Asian food trade. The establishment of the Association of Southeast Asian Nations (ASEAN) facilitated trade among ASEAN countries and China, with the commitment of member countries to free trade solidified in the signing of the ASEAN-China Free Trade Area in 2010 and corresponding tariff reduction on commodities including food. The ASEAN Plus Three (ASEAN members plus China, Japan and South Korea) Emergency Rice Reserve set up in response to the 2007 food crisis recognized the close ties between Asian economies. From 2000 to 2015, Chinese food imports from Southeast Asia rose by $13.2 billion.

Despite this large increase, China’s still has a complementary relationship with Southeast Asian (SEA) markets because China’s exports to said markets have kept up, thus maintaining its  net food export value within a steady range and creating more healthy trade flows. On the contrary, China’s agricultural trade flows with global markets reflect a growing food trade deficit. As seen in the graph below, the trend of food export values between China and SEA markets and China and the world shows a large deviation: while Chinese food trade with SEA markets remain relatively stable, trade with world markets reveal worrying drops in net export value. 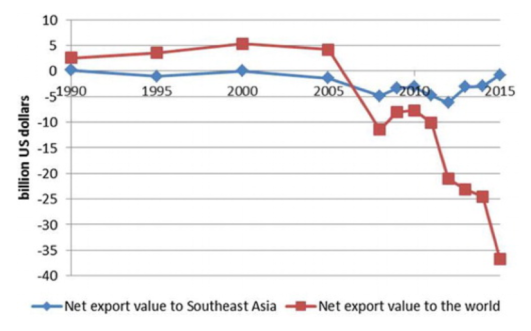 It seems natural then, that China would turn to its relatively safer trade with Asian countries when foreign markets such as the in the U.S. become unstable. It should be noted, however, that China has been building its capacity for food security long before the U.S.-China trade war. The Belt and Road initiative first proposed by Chinese president Xi Jinping in 2013 lay the foundations for increased trade within Asia and the “Vision and Action for Building ’One Belt One Road’ Agricultural Cooperation” put out by the Chinese government in 2017 outlined cross-border collaborations in agriculture between China and Asia. As translated by Rebecca Arcesati, a scholar at Peking University studying Chinese politics and China-EU relations, the plan described Central Asia as a “vast hinterland of abundant agricultural resources with huge developmental potential…and markets with strong complementarity”. Chinese companies have set up an agriculture and textile industrial park as well as the China-Kazakhstan Modern Agriculture Innovation Park in Tajikistan and Kazakhstan respectively. Kazakhstan in particular will be supplying three times the current amount of wheat it exports to China by 2020, on top of soybean exports that have been increasing since 2016.

At the recent Third Trilateral Agriculture Ministers’ Meeting on  November 10th, China also called for greater agricultural cooperation between China, Japan and South Korea, with the goal to double its agricultural trade with both countries to more than $30 billion in the next decade. Ye Xingqing, director of an agricultural economics think tank connected to the State Council, highlighted that countries in the Belt and Road initiative are essential to strengthening China’s food security and its diversification of food supply. Plans are rapidly being made to do so, with current U.S. tariffs highlighting the urgency of this diversification.

Ultimately, it is up to China, which has been known for its stubborn (and somewhat defensive) approach to international relations, to prove its resourcefulness and fundamentally restructure its food supply chain. Its success (or failure) will reshape food supply chains in Asia and have reverberations for the rest of the world.