The FCC is deciding whether or not to save the internet with regulations, but does the internet really need saving?

Over the past few years various activists and companies have pushed the FCC to adopt net neutrality regulation. The FCC or Federal Communication Commission, is the US administrative agency that deals with the regulation of telecommunications. Established in 1934, the FCC regulates radio, phone, television, and other communications. The initiative that the activists are seeking to pursue, net neutrality, is the principle that all internet traffic should be treated equally by ISPs (Internet Service Providers).  Months ago there has was much discussion regarding the FCC and Net neutrality which has only recently died down, however this debate is likely to be renewed as a vote is expected to take place next month.

The debate goes something like this. Net neutrality advocates in the US argue that the FCC should regulate ISPs in order to establish the fair flow of traffic. They argue that the unfair treatment of traffic, say by an ISP such as Comcast, could negatively affect the openness of the internet. Critics of net neutrality regulation such as current FCC chair Ajit Pai, argue that imposing net neutrality regulations would hamper economic activity on the internet. The primary issue of concern is whether ISPs should be regulated under Title II of the 1934 Communications Act as “Common Carriers”. What does it mean to be regulated as a “common carrier”?

Under the law, when a telecommunications company is listed as a common carrier, it must abide by a whole host of anti-monopoly rules. These anti-monopoly rules include regulations on price and content. Proponents of net neutrality laws claim that companies such as AT&T and; Verizon, among many others, have been violating the rights of consumers by favoring certain traffic over others, and thus desire more stringent regulation. However the FCC under the current administration is reluctant to enforce such measures. But how valid are these concerns? And more importantly what would be the consequences of enacting strict Title II regulations?

First to put it in perspective, the internet is arguably the most unregulated institution and system currently in existence today. No single government or company centrally controls the internet. Until 2015, there has been no comprehensive regulation regarding net neutrality in the United States. Net neutrality regulation proponents argue that companies have taken advantage of this fact, and have unfairly treated network traffic. In one famous instance in 2007, Comcast was cited for “throttling” (slowing down) traffic. In another instance a company was found to have blocked Vonage VOIP phone calls. Instances like these have led proponents of regulation to argue for increased FCC supervision over the internet. While instances like these are examples of companies acting unfairly, they are not the norm and for the most part represent outliers.

Arguably a greater threat to net neutrality is government itself. The most prominent and notorious would be China’s extensive surveillance and censorship of the internet, as well as large state ownership of the two primary ISP’s in the country; China Telecom and China Unicom serving an incredible 20% of the world’s internet users.

While China may be considered much more restrictive than most countries, other European states have also acted in similar ways. The UK government has worked to implement age restricted content and has issued court orders to numerous sites publishing “wrongful” content. The UK does this through the Internet Watch Foundation, classified as a charity. Spain has recently been cited to have blocked pro-Catalan independence web addresses. These violations of internet freedom have been well documented by the NGO Freedom House. 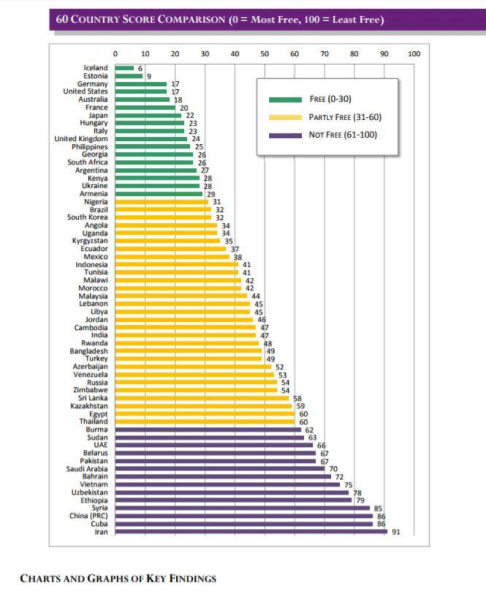 Examples of such restrictions are much more commonplace than those of web traffic discrimination by private ISPs for monetary gain. The primary reason ISPs generally do not act in such way is because it would generally not be in their interest to do so. ISPs generally advertise their service in terms of price and speed, unlike those of bundled television packages. They choose not to play favorites since users demand a service that does not do so. It is possible that down the road they may do so, however it may not be necessarily wrong. Allowing internet companies to experiment with packages and favor certain forms of traffic is not in and of itself wrongful, and it should not be construed as such.

In some ways, by allowing companies to remain less regulated, it may allow them to provide a better service. If customers are willing to pay a lower price in order to have their internet favor certain services such as Netflix or Amazon, there can be no harm done by an ISP choosing to provide a package that caters to such market.

Additionally, ISP’s need the flexibility to manage traffic according to their needs to compensate for increasing usage of the same infrastructure. In the US alone, surveys conducted by the Pew Research Center show that individuals with internet access went up from 52% in 2000 to a whopping 88% in 2016.

In models constructed by Peitz at al. at the University of Mannheim, it was predicted that strict net neutrality laws may lead to severe web traffic inefficiencies.  Using game theory Peitz models showed that a strict net neutrality legal system may force ISPs to employ more inefficient traffic management methods. Peitz postulates that according to his proposition “net neutrality generates an inflation of traffic, leading to excessive congestion of the network”.

The possibility of unintended consequences may continue even further. If Title II regulations were to be applied to ISPs in their entirety, it may be possible that free ISPs or “freemium” providers may be outright prohibited from the market. By their very nature new free ISPs such as Google Fiber’s project in Kansas favor certain traffic, such as traffic that goes to Google’s servers. Would it be right to consider this a discriminatory or monopolistic tactic? A great example has been Microsoft, which provided Internet Explorer free with its Windows operating system. Microsoft’s decision was considered a monopolistic discriminatory tactic according to the DC district court in 2001 in United States v. Microsoft 253.Fd 34. Equally so, Title II regulations prohibit monopolistic tactics and mandate a whole host of substantial regulation. The list of Title II regulations that go along with common carriers is too expansive to cover in this article, therefore I have listed a only a few examples.

The FCC lists on their website a whole host of rules that apply to Common Carriers. Here are just a few examples:

Under section 64.2325, the FCC is instructed to enforce regulations governing reasonable rates, terms, and conditions. So far, these rules have only applied to telephone companies, but what would define a reasonable rate for an ISP to charge? What would be considered a reasonable term or condition?

Under section 64.2007, the FCC requires approval for using customer proprietary network information. Telephone companies for years have had to keep records of customer information, and are only permitted to furnish this information after receiving customer approval. What would be the record requirements ISPs would have to hold and furnish for their customers?

Under  Part 61 of the Subchapter regarding common carriers, there would be new rules regarding the collection of tariffs, under Part 59, there are rules regarding how infrastructure sharing must occur. These rules could potentially be disastrous if applied to smaller ISP’s whom would have difficulty assessing how to go about collecting taxes or developing their infrastructure in order to compete with larger ISPs.

It may be argued that it would be unlikely that the FCC would enforce such provisions, however court cases in the past have always given deference to administrative agencies to have the widest possible delegation. In Mistretta v. United States (1989) the Supreme Court ruled that so as long as congress has given an agency or commission an “intelligible principle”, it is free to carry out an open variety of means to achieve that objective.

Another example of such broad delegation would be the landmark Chevron v. National Recourse Defense Council (1984) decision, in which the Supreme Court ruled that an administrative agency such as the EPA (Environmental Protection Agency) is permitted to carry out its interpretation so as long as Congress left the statute ambiguous and when such interpretation is reasonable.

With the sections of regulation listed before, the ambiguity in the law is quite clear, and it would be impossible to determine what direction the FCC will take in applying such rules.  The fact is that the Communications Act was created in the 1930s using broad terminology, and with a Supreme Court that has been ever more open to administrative deference, the FCC is free to implement any number of rules that apply to common carriers. Ultimately, the FCC under Title II has a wide range of authority.

While acknowledging the pressing concerns that net neutrality advocates have in regards to protecting a free and open internet, the adoption of Title II regulations and the labeling of ISPs as Common Carriers may result in drastic consequences down the road. In a field with limited research, it may be preferable to avoid major changes in a largely stable and free US ISP market. The FCC may down the road work to address serious net neutrality violations by carriers using new and specifically addressed legislation, but in the meantime the adoption of a common carrier status for ISPs may create more holes than it may fill.