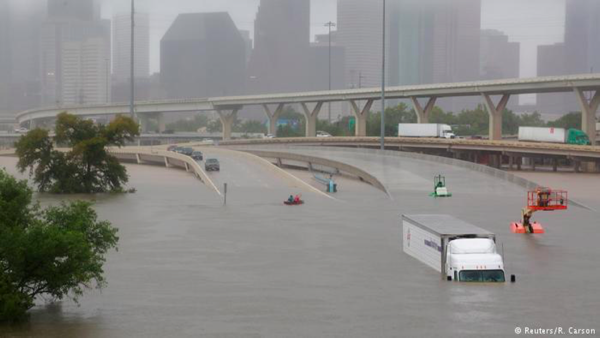 In the past month, the US economy lost 33,000 jobs and for the first time in seven years, the employment market is in red. The combined damages from the Atlantic hurricanes are estimated to be at least $400 billion. “Economists estimate that Harvey and Irma, which struck Texas and Florida, could cut as much as six-tenths of a percentage point from GDP growth in the third quarter” (Fortune). Thousands of families were not insured, stations were out of gas, evacuation efforts were greatly obstructed, and not to forget thousands of casualties suffered as well!

Estimating the economic impact of hurricanes depend on various factors: location of the region, intensity of the hurricanes, factors impacting the economic output of the region and the intensity of the output. Impact estimates are divided into two categories: direct (such as physical destruction) and indirect (such as insurance claims). A university study has taken a different approach with  three major factors into consideration: the number of storms, maximum wind speed at landfall, and GDP.  For the university study’s analysis, “damages per storm over time conditional on wind speed are proportional to nominal GDP”. In any case, most of the actual statistics would take at least a year or 8 months to give a perspective on the actual economic damage of these hurricanes. 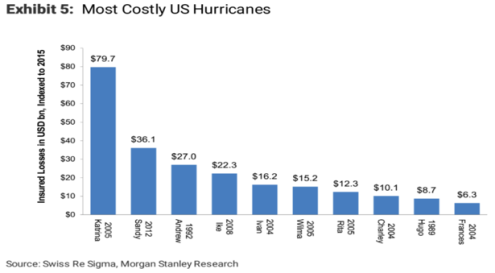 Figure 2: Most costly US Hurricanes

The Atlantic storm season is an annual event, but this year with five major hurricanes making their landfall in the US, questions are being raised about the causes of these hurricanes, with climate change as a dominant one. It is a basic scientific fact that the potency of hurricanes depends on the amount of rainfall they can precipitate. Jamie Kossin, an atmospheric scientist at the National Oceanic and Atmospheric Administration (NOAA) explains that “air can hold about 7 percent more water for every degree Celsius increase in temperature”. Also, the thermal expansion and melting of Polar Caps have led to an increase in ocean water temperatures. Since tropical cyclones can emerge at a quicker rate when water is at higher temperatures, these hurricanes are formed on a more powerful scale and at higher frequency. 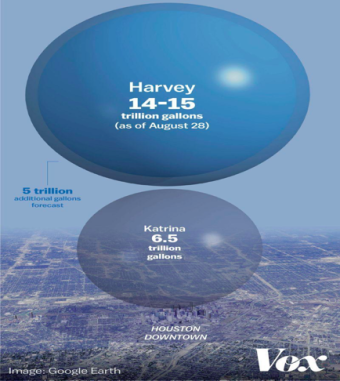 While people generally love to place sole responsibility for such disasters on a cause like climate change, they shouldn’t forget that urban planning and design plays a role as well. Nicknamed “The City with No Limits”, Houston has experienced its explosive growth, with millions migrating to the expanding metropolitan area in recent decades. While growth is never bad for any economy, there has been no evaluation of building regulations to accommodate the ever-increasing population. Building regulations have been snubbed, hectares of prairie land which used to absorb enormous amounts of rainwater have been encroached to build housing and drainage systems incapable of handling massive storms. The result of these: catastrophic flooding. This situation cannot be deemed as unprecedented as flooding has been common in Houston for the past 3-4 years. Clearly, investors and financial experts are losing sweat over the possible consequences of this change in climate phenomena on US economy.

So, what can we learn? We need to focus on the major causes of these hurricanes which inflict a colossal economic impact. The chief causes as explained above are climate change and urban planning. Take proactive measures and firm actions on urban planning. New technologies must be applied to identify areas prone to flooding, prevent social infrastructure institutions like schools, hospitals, government office buildings from setting up in risky zones. Build green infrastructure to create flood buffer zones and sustainable pump hydrology to transfer water. There is a strong case now to completely overhaul the city planning by revamping the existing infrastructure and equipping them with the latest tech to combat the inundating floods.

As we have witnessed from previous natural disasters, the U.S. economy continues to march on and grow but without paying for the disregards and continued ignorance of impact due to hurricanes. Nonetheless, if we do not take concrete steps to look into these two factors – climate change and urban planning –we would continue to see such disasters as something that is not only wrecking economy but impacting human lives too. Can America, by taking proactive steps on both climate change, control the hurricane’s’ path and intensity level? Difficult to say. Can America be better prepared?  Yes, it can! Given the billions of dollars impact on its economy, huge investments made in urban/city planning and precious lives which could be saved, America should be better prepared.

Figure 1: Destruction of a highway wrecked by Hurricane Harvey