“Why have wages in the U.S. been growing so slowly?”

Since 1964, the United States experienced a near zero level of real wage growth. In other words, after inflation is taken into account, wages paid to U.S. workers have been flat and in some sectors even falling. This problem puzzles many economists and workers alike – after all, as shown in the following chart, productivity growth in the U.S. has risen steadily since 1945. For the purposes of this article, it is important to interpret wages not as what firms pay their employees each year or hourly, but how much one sells one’s labor for in the labor market. The following arguments will flow more clearly from that point of view. The two primary reasons of wage stagnation this article will address are the lack of fiscal freedom in our government and technology. 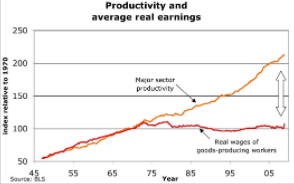 What does the government have to do with it?

Since 1965, an increasing amount of U.S. federal revenue has gone to entitlement programs that are both difficult to destroy or modify. The big three entitlement programs the government funds are Social Security, Medicaid, and Medicare. Government spending to these programs, politically speaking, is automatic. Thrown into this group is payment on our debt, since that is also “automatic.” In 1962, about 35% of federal revenue was dedicated to those four things, leaving 65% of federal revenue to discretionary spending, or money that could be allocated to different programs every year. Fiscal discretion has been falling, making up only 20% of the budget in 2014. By 2022, fiscal discretion is projected to make up a miniscule 10% of the budget. This is due in part to the aging U.S. population – if you commit to spending money on the elderly, as more people become old more money will need to go to them. Discretionary spending historically created much growth in the economy, regardless of the economic stimulation policy one subscribes to. Tax cuts would be matched with discretionary spending cuts, and job creation programs would be funded by it as well. Neither Reagan’s Tax Reform Act of 1986 nor FDR’s New Deal could’ve been “paid for” without an ample discretionary spending budget. Sadly, it is so politically unpopular to make any serious change to the non-discretionary spending programs that the wage stagnation problem on this front will only get worse. 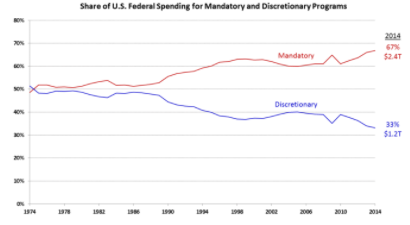 Where does this leave us?

There exists both an optimistic and pessimistic view toward the problem of wage stagnation. The optimistic view holds that some combination of policy prescriptions can stimulate inflationary pressure on wages and bring back past income growth. These policy prescriptions include the currently popular idea of implementing a universal basic income. The idea behind a universal basic income is that while the rapid technological changes will affect median wages and inequality, the overall societal wealth generated will be enough that a large proportion of the population can live on a guaranteed income from the government. The pessimistic view is that technology will continue to replace jobs that require both skilled and unskilled labor, and that this dramatic shift in the working population cannot be easily offset by any government policy action. Throughout history, a breakthrough in technology was followed by a shifting of labor from one sector to another; agricultural advances moved labor from the primary sector (raw materials) to secondary (manufacturing), and the industrial revolution took us from the secondary to the tertiary (service) sector. At the moment, as technology moves us away from the tertiary sector, there is no other sector for that labor to go – hence, stagnating wages, underemployment and discouraged workers. Economists widely disagree on solutions to wage stagnation, and if current trends continue, it has potential to be the most serious economic problem in U.S. history.

When what comes down doesn’t go up. (2015, May 02). Retrieved from http://www.economist.com/news/briefing/21650086-salaries-rich-countries-are-stagnating-even-growth-returns-and-politicians-are-paying