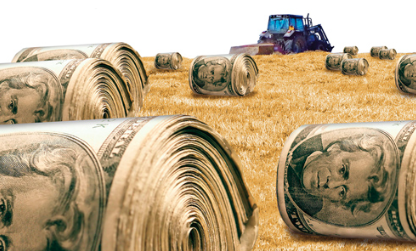 “Don’t think the Agrarian sector is as sexy as the Financial sector? New Zealand would argue otherwise.”

New Zealand, although geographically small, and often overlooked, humbly boasts one of the most efficient and productive industries. It’s an industry that’s, arguably, more essential than finance and manufacturing, and of paramount importance given our burgeoning global population. This industry is agriculture.

A Background on New Zealand’s Economy

As the 53rd largest economy in the world (in terms of GDP), New Zealand is one of the most globalized economies, relying heavily on international trade. Their economy is dominated by the service sector, which comprises of nearly three-fourths of the entire economy, followed by industry, at 19%, and lastly, agriculture at 7%–but it’s a mighty 7%. New Zealand exports roughly NZ$61 billion, which are mostly all agricultural products: meat, dairy products, seafood, and wool, just to name a few.

With a mere population of roughly 4.5 million people, New Zealand is the world’s largest exporter of both sheep meat and dairy products. In addition, they export 95% of their agricultural products to over 100 countries, feeding over 40 million people monthly. For example, the dairy industry contributes mostly to exports, which generated NZ$ 17 billion in December 2014–that’s roughly 27% of total exports. Needless to say, agriculture plays a key role in their economy.

Back in 1984, New Zealand’s government made the polemical economic decision to cut all subsidies to farmers, and instead use that money for agricultural research and development, also known as R&D. Agricultural subsidies, which I will cover in more depth in the following paragraph, are granted to farmers by their respective governments as a method to ultimately keep the country’s farming industries globally competitive. At first, cutting direct subsidies may seem counter-intuitive to the welfare and growth of the economy, especially when many of the top agriculture-producing countries such as the United States, and various European nations, heavily subsidize their agrarian sector, but New Zealand’s decision to cut farmer’s subsidies and reallocate those funds into R&D has single-handedly led to the prosperity of its agrarian sector.

Farming subsidies are always a heated topic of debate among economists as well as  politicians; and for a good reason. At their core, these subsidies usually take the form of money grants or tax reductions, strategically gifted to farmers in order to influence the cost and production of goods. For instance, due to subsidies, a grain farmer in Iowa is able to compete with other global farmers because he or she has a cushion of income from the government. To put this into an accessible example: two children, kid A and kid B, set up lemonade stands across the street from one another. Both have $40 to purchase all of their lemons and sugar, but then, kid A is given another $20 on top of the $40 to use however he or she chooses. Because kid A has more money to invest in the lemonade stand, he or she has a financial advantage and can either make more lemonade, purchase more expensive, better, lemons for the lemonade, or sell the lemonade at a reduced price, and as a result will outcompete the other stand, kid B, across the street.

So how did cutting farming subsidies in New Zealand actually improve its agrarian sector?

The World of AgTech

As soon as the government cut agricultural subsidies, farmers were forced to innovate new and efficient farming and livestock methods in order to survive and compete on a global scale. This is a perfect example of how competition drives innovation; and as you’ll learn in any introductory economics course: innovation is the key to a prosperous economy.

To circle back to the analogy of the lemonade stands, instead of kid B giving up and taking down the lemonade stand, he or she can find ways and innovate to make lemonade more efficiently, in order to stay competitive against the subsidized kid A. This is exactly what happened with the New Zealand farmers. In addition, to benefit the farmers even more, the government took the money from subsidies and invested it into R&D and agricultural technology innovation to support the efficiency of their agrarian sector.

Thus, in order to stay competitive on a global level, New Zealand’s farmers began to specialize in farming production, specifically livestock agriculture. This means that instead of trying to produce many different types of agricultural products, farmers stuck to what they could do best given the geography, climate, knowledge, and resources. For instance, if New Zealand tried to mass produce wheat, they would not be able to compete with the monstrous wheat-producing nations, but pastoral farming made sense because they could farm year-round, and New Zealand’s climate is conducive to livestock agriculture.

New Zealand has a competitive advantage in pastoral farming, so that is where they invest most of their time, energy, and resources. Just as how specific-practice doctors are much better in their particular field compared to general-practice doctors, New Zealand specializes in pastoral farming and have innovated and gained knowledge to stay competitive in this field of agriculture. Now, over 30 years later, they have one of the most efficient agricultural economies in the world. New Zealand is a country 1.4% the size of the United States in terms of population and 0.074% in terms of square miles. Yet, they are still able to compete on the same level as other major agricultural countries; as mentioned earlier, they are the largest exporter of dairy products in the world, that’s pretty impressive.

The United States, as we all well know, is notorious for heavily subsidizing its farming industry. Farming subsidies in the U.S. aroused because of the great depression and harsh droughts around the 1930s. Although today, nearly $20 billion dollars is distributed to American farmers each year; and interestingly enough, most of these subsidies go to the large corporate farmers, who have no need for them. In addition, there is a large misconception that the farming industry is very volatile, but according the the Wall Street Journal, “Less than 1% of all farms (about one in every 200) go out of business in any given year, and the three main causes of those failures are catastrophic health-care costs, divorce and incredibly poor management.”

The other issue with these subsidies is that many large corporate farmers take shortcuts to find the cheapest, not necessarily most efficient, methods of farming i.e. cheaper fertilizers, barren land, etc., because they know that government subsidies will act as a safety net if they fail.

Farming subsidies in the United States hinder innovation for these reasons. Farmers do not have to innovate to compete, but rather they can rely on subsidies to stay in business.

Conversely, the New Zealand agrarian sector has become extraordinarily efficient, because farmers were forced to innovate in order to compete globally.

A pinnacle of the industry in New Zealand is its agriculture technology (agtech) innovation as well as its R&D. Annually, about NZ$30 million (~0.1 % of U.S. farming subsidies) from the government is invested into R&D to improve agriculture profitability and productivity. Agriculture R&D companies have arisen because of this funding. For example, Tru-Test, a New Zealand agtech company that invented a milk meter, is the world’s largest supplier of the International Committee for Animal Recording. In addition, these public funds have led to the development of world-class agtech products such as the electric fence, livestock scales, and genomic selection technology.

Cutting subsidies and funding R&D boosted innovation which resulted in more efficient agricultural and pastoral farming methods. Quoted from the New Zealand Agribusiness website,“From 1984 to 2007, the agriculture sector’s total productivity increased by an annual compound growth rate of 3.3 percent. Although New Zealand has cut its sheep flock by more than 50 percent to 30.8 million since 1984, it still produces similar volumes of sheep meat through the use of best practice integrated systems from seeds, pasture, genetics, animal health and farm management to food processing.”

What Others Have to Learn

New Zealand, a tiny country in the Southern Pacific Ocean, is able to compete within the global farming industry because of their focus on innovation. Many of the leading agricultural countries are over subsidized using taxpayers money. These subsidizing countries are stunting their growth in knowledge and technology, because whenever agricultural competition get tough, the governments subsidize their farming instead of figuring out efficient ways to deal with the problems. The global agricultural industry as a whole would be much more productive and efficient if, instead of patching up issues with subsidies, they rolled their sleeves up and spent time, money, and energy finding innovative solutions.

PEMEX v the Mexican Economy: A Countdown to Reality

Why Joining the EU Will Help Turkey

The Price of Admission: Employee Burnout & When a...

The Reckoning of the Energy Giants: The Battle between the Oil...