The U.S. Federal Reserve is on pause hiking interest rates.

What does it all mean for commercial real estate property values, returns, and capitalization rates?

On February 20, 2019 the Federal Open Market Committee (FOMC) released the minutes from its two-day January 2019 meeting and communicated that it effectively would pause interest rate hikes for the foreseeable future and has maintained this stance year to date. Typically, the Fed’s decisions on interest rates heavily influence the performance of the economy’s largest asset-class, commercial real estate (CRE). But the effects on performance indicators such as the returns on CRE transactions, property values, and capitalization rates involves more factors that are indirectly affected by interest rates. Since the meeting, the U.S. economy has largely remained supportive of the commercial real estate sector. The reason for this dynamic is not immediately clear and so it is worth examining it in more detail.

First, it seemed that the U.S. economy would remain steady despite mixed softening indicators. Fed officials modestly cut projections for 2019 U.S. real GDP growth to 2.3%, down from the 3.1% real growth in 2018. The Fed cited the partial U.S. government shutdown and the waning effects of the 2017 tax act as catalysts impacting labor supply and aggregate demand. Interestingly, the Fed also identified global issues such as Brexit, global growth, and changes in bilateral trade policies as contributors to the change. 2020 U.S. real GDP projections remained unchanged at 1.7%. Volatile economic activity can negatively create uncertainties around new constructions and new developments, as well as new potential leased office space, leading to decreased investments, lower valuations and lower occupancy rates. On inflation, the Fed supported an expectations model whereby  instead of hitting its standard 2% inflation target, it would accept overshooting it to make up for the recent years when inflation was too low. But to encourage more meaningful inflation growth, it will most likely have to keep interest rates at their current low levels in the meantime. This implication may allow property values to rise with continued cheap credit and money flowing in.

The second takeaway from the meeting minutes was that the Fed’s balance sheet unwinding, which involved a large chunk of mortgage securities, appeared to be closer to the end. In the December 2018 meeting, the Fed stated that the securities runoff was on track: “I don’t see us changing that,” said Fed Chair Jerome Powell at the time. Notwithstanding the stable tone, the January 2019 minutes pointed to a potential end in sight. 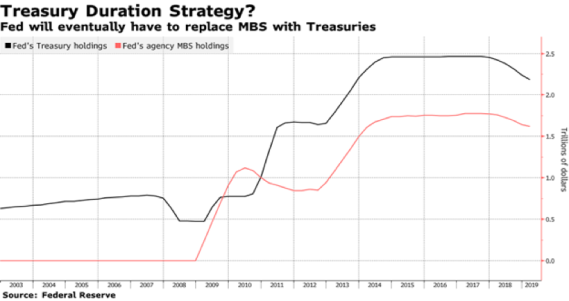 The chart above shows that the Fed’s balance sheet ballooned after the great recession after the purchase of U.S. Treasury and Mortgage-Backed Securities (MBS) holdings. The latter impacted mortgage lenders’ appetite and, thus, demand for real estate. In October 2017, the FOMC began a balance sheet normalization program. This initiative reduced holdings by up to $50 billion per month, while not reinvesting most of the proceeds as the securities matured.  Potentially ending the balance sheet roll off in 2019 is a positive sign in terms of future dovishness. Yet the Fed hinted at potential rate hikes depending on how risks evolve in these coming months. Having reached a peak of $4.52 trillion in January 2015, the Fed’s balance sheet sported holdings of  $3.98 Trillion by February 20, 2019, comprised of about $2.2 Trillion in U.S. Treasury assets and $1.7 trillion in MBS assets.

However how much CRE transactions will ultimately return also depends on several factors such as investor risk appetite, U.S. economic conditions, and liquidity conditions, of which the Fed has indirect control over. As mentioned before, stable interest rates should provide renewed investor appetite for moderate and high-risk assets (i.e. real estate). Steady rates also lead to a continued search for yield amid tepid returns from certain asset classes. Interest rates on hold should also support liquidity conditions with ongoing access to funding. A pause in rate hikes could also be interpreted as a neutral Fed Funds rate, meaning that the current rate is neither too high to cause a deceleration nor too low to overheat the economy.

In terms of CRE property values, a late cycle yet resilient U.S. economy is still the main driver for property values. This is valid across the main CRE types: office, industrial and logistics, and retail. Capital flows are another driver for property prices. Flows remain robust and well-diversified coming from the U.S. and overseas. Despite interest rates being on hold, debt markets remain liquid on the combined effect from favorable growth and investor demand. For instance, CRE funding continues to be provided by banks, institutional investors, and non-bank financial institutions, at still affordable rates. The office sector is benefiting from new business models such as co-work spaces which will increase utilization rates. This trend will support redevelopments and increase the value of properties with otherwise low occupancy rates. The demand for industrial and logistics spaces reflects healthy demand from e-commerce activity. Class A warehouses with technology features command higher rents and thus higher property values. Retail properties are benefiting from a clearer trend of online retailers opening brick-and-mortar stores. With interest rates on hold, debt-funded square footage expansion remains an attractive choice. As the growth in physical expansion takes hold, competition for retail locations will gradually rise leading to higher property values as well. 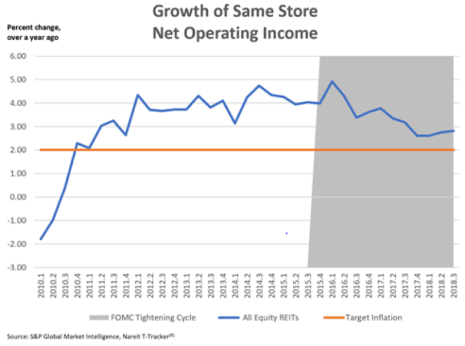 Capitalization rates reflect several drivers such as investor risk appetite, capital flows, real estate fundamentals, and interest rates. Capitalization rates are defined as the net operating income (NOI) of an asset divided by its market value. This indicator evaluates property-level fundamentals to gauge the potential rate of return on a real estate investment. Given the late stage in the recovery cycle, NOI growth for listed equity REITs has started to moderate from 4.9% in 1Q2016 to 2.8% in 3Q2018, according to NAREIT. As noted in the chart above, these readings show an increase from 1Q to 3Q in 2018 and are still above target inflation of 2%.

The chart above shows that since the FOMC tightening cycle began in 2015, the ratio of interest expense to NOI for equity REITs has trended down from 23% 2015 to 20.78% in 3Q2018, based on NAREIT. Should this trend continue, it can benefit NOI and property fundamentals, both of which drive up cap rates. 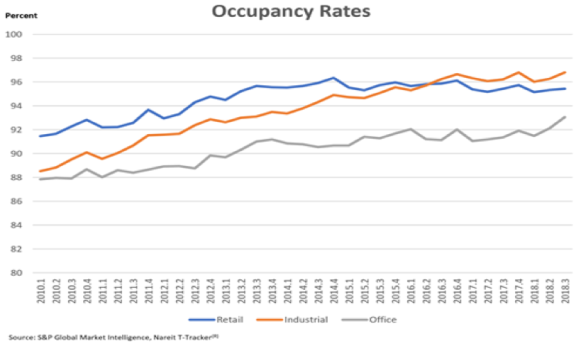 Overall, the current economic expansion is the second longest since 1945. Starting in 2009, the expansion has posted 38 consecutive quarters of growth. CRE occupancy rates show positive correlation to that trend. In the chart above, NAREIT data shows occupancy in Retail property has been steady at 95.5% from 1Q2015 to 3Q2018. The Industrial segment occupancy rose from 94.7% to 96.8% in the same period. Lastly, the Office segment rose from 90.6% to 93.0% in the same period. The Fed’s pause stance on interest rates was prompted by uncertain U.S. and global economic and market conditions. This decision partly seeks to avoid a policy error of continuously hiking rates with adverse effects. Commercial real estate, as of now, shows solid fundamentals further supported by a resilient U.S. economic outlook, as forecasted by the Fed.

Curry, K. (2019, January 18). The Possibility of the Fed Pausing on Interest Rate Hikes Is Good News for CRE—As Long as it Doesn’t Lead to a Bubble. Retrieved March 3, 2019 from https://www.nreionline.com/finance-investment/possibility-fed-pausing-interest-rate-hikes-good-news-cre-long-it-doesn-t-lead